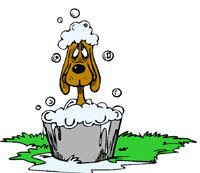 Most Beautiful Dog was out on the back 40 for his evening patrol when we noticed he was barking and carrying on. This happens on occasion, but what really got our attention was the pungent smell of either old burning tires ... or a skunk.

I went out with a flashlight to investigate and sure enough, MBDog was circling our flatbed trailer, giving a darling young skunk underneath what-for.

As my longtime blogging friends will recall, MBDog has been skunked twice before - and I always make sure I have the proper ingredients on hand to make a batch of deskunking shampoo. I went in the house to draw a bath and mix the potion.

By the time I came back out, MBDog was carrying the poor lifeless thing around in his mouth in a victory parade. :( Ugh. I was really hoping he'd just bark at it and not figure out how to get it.

I recruited Hub to help me get the critter away from MBDog and dispose of it while I hauled him in for a scrubdown. Along with the revolting stench, he was smattered with blood smears. Yuck. I got him cleaned up and tended to his wounds. The baby skunk's fighting demise made me sad, but MBDog was just doing what a hunting dog does.

MBDog is now fresh as a daisy and snoozing on the couch. I, on the other hand, smell vaguely of old burning tires, and decided this was a good time to remind my dear friends of my beloved lifesaving Deskunking Shampoo recipe, should it ever be needed.


(MBDog is a shorthaired dog weighing about 75 pounds, and this quantity is just about right for him. Adjust your quantities accordingly if you have a larger or furrier dog)
Mix all ingredients and use immediately. Wet dog's fur and lather in the shampoo mixture thoroughly and generously, taking great care around the face not to get it in the mouth, nose or eyes. Let mixture sit for 3-4 minutes, rinse. Repeat if needed. If desired, follow up with a bath of baby shampoo or other gentle cleansing soap - this will prevent skin irritation.
Hope you never need it! 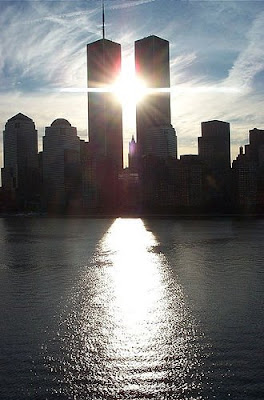 Could Michael Moore be a bigger jackass?

Hurricane Gustav hitting New Orleans at the beginning of the RNC is "proof that there is a God in Heaven"???

According to Michael Moore it is - and is said so by him with a snicker.

Why - I repeat, WHY - is he not getting strung up for this ridiculously heartless statement? What a worthless, self-righteous, oxygen-wasting, arrogant piece of sh!t. I can't even think of any expressions vile enough to describe him, or anyone who would say such a thing. ANYONE of ANY party should be disgusted. I can not BELIEVE he isn't getting so completely ripped for this that he disappears into perpetual seclusion!!!

This isn't a joke, you jackass. This isn't an unmanned probe crashing, or lightning hitting an endangered tree. This is people's lives. LOTS of people. People who've lost everything not once but twice in recent years. Yep, that's hilarious. God would surely orchestrate such a thing just to appease or discourage a political party. Michael Moore makes me sick.

THIS? Is considered a brilliant mind? Spare me. I just threw up in my purse.