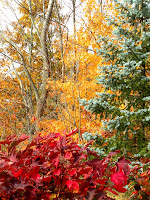 Autumn is the second spring,
in which every leaf is a flower.
- Albert Camus
Fall is my favorite time of year. It also seems to be the shortest. The peak leaf season is so brief - like a precursory rainbow before the deep dark night of winter.
Usually in my corner of the world, the bright fire of the autumn foliage is doused by a consistent rain until nearly all the leaves have fallen. This year I was blessed with a reprieve on a mild Sunday afternoon. I grabbed my camera and Incrediboy, and we headed out on the golf cart to take in the splendor.
We enjoyed a drive down our quiet country road and headed into the nature preserve. There we took a walk along the nature trail. Many leaves remained on the trees, blazen against the vivid azure sky, and those that had fallen were still vibrant with the pigments of the season. I soaked in the beauty.
The above photo was taken on our outing. Isn't it delicious?
Soon all the chromatic chaos will fade into the brown-gray of midwestern winter - and my eyes, craving color and beauty, will feel malnourished in the long months following. If only I could capture and keep some of the rich and exquisite passion of autumn's splendor, to take out and enjoy whenever I needed it, I would be one happy camper.

Never thought I'd see the day.

Seeing as I'm getting old and fat and can't drop a few pounds just by thinking about it anymore, I haven't eaten a donut in months. It doesn't seem to have made much difference ... I still have muffintop over my waistband and nothing fits right ... but perhaps I'm not expanding, at least.

My boss brought in a box of donuts today. Among them was a beautiful, perfectly proportioned, artistically glazed cinnamon cake donut.

I decided that, since it's been so long, I'd treat myself just this once.

It smelled heavenly. As I returned to my desk, I pre-emptively licked the glaze from my finger. My brain flooded with endorphines. I took a deep anticipatory breath and sunk my teeth into the sweet dense pastry.

The sexy flavors were all there. The cinnamon, the sugar, all the good stuff. But they were crowded out by something else.

Lard. Thick, smeary, gross lard. I could feel it coating the inside of my mouth, as if I'd taken in a spoonful of Crisco. Ugh.

I couldn't even finish it. I threw it away. I've since been trying to get the greasy film out of my mouth with scalding hot coffee and gum. But it's still there.

9 days after application, my tattoo is looking exceptionally crusty. I don't recall my previous tattoos taking so long to heal, nor getting so icky looking in the process - but I've also never had such an elaborate one done. (Not to mention I was much younger when receiving the others - perhaps I can't heal as quickly as I used to). I've taken extremely good care of it per my tattoo artist's instructions, so I'm trying not to panic. But the linework is really scabby and while some areas are now peeling and fresh new skin is revealed, it appears that a lot of the color is gone.

I combed some internet information last night and read a few sites addressing tattoo healing. It seems that temporary loss of color is common until the skin fully heals and the ink pigment once again emerges. I sincerely hope that's the case. I see what I consider to be a lot of pink fleshtoned area amongst the blues and greens, and I don't want to have to get touchup work and subsequently go through the healing process again. Not only in the interest of avoiding pain, but it's already getting too cold for capri pants.

Among other events of late, I've returned from the semi-annual BFF gathering in the state up north. It was a lower-key weekend than others have been, but wonderful all the same. I love those girls.

I've really been missing my blog hobby more than usual lately. I haven't had the time, energy, nor inspiration to post anything worthy in a long time ... But I'm going to try and remedy that in the near future. Stay tuned to see some new things, hopefully soon. I've also probably all but lost anyone who used to read me regularly, so if you can, spread the word so I don't have to pimp myself directly.

All this will probably take place after this coming weekend. I'm going out of town to hang with my Girls on one of our bi-annual weekends. Until then, here's an interesting little blog I ran across. Letters of Note. Those of you who know me know I LOVE this kind of stuff. It will henceforth be on my "fun diversions" blogroll. 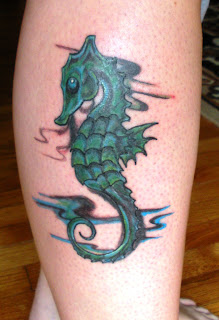