Here There Be Pirates

Lyric of the Day:

Mother Mother Ocean
I have heard you call
Wanted to sail upon your waters
Since I was three feet tall
You've seen it all, you've seen it all
Watched the men who rode you
Switch from sails to steam
And in your belly you hold the treasures
Few have ever seen
Most of 'em dream, most of 'em dream
Yes I am a pirate
Two hundred years too late
The cannons don't thunder
There's nothing to plunder
I'm an over-forty victim of fate
Arriving too late, arriving too late.

Jimmy Buffett - A Pirate Looks at 40

I saw "Pirates of the Caribbean 2" last night. I'd been looking forward to it for a long time - I loved the first movie, full of excitement, romance and a lot of laughs. I was not disappointed with the sequel. In fact I can't wait to see it again.

I have a weakness for pirates. The swagger, the salty smarm, the romance of adventure. Since I was a girl, I have loved the sea and those who lived and died at her hands.

I always fancied myself a pirate's lady.

I know that real pirates were not so savory. With and average age in the late 20's despite the old gray haggards oft thought of (youth was probably a necessity in order to handle the great physical demands of a life of strong-armed debauchery on turbulent seas), they were an undesirable lot - devoid of morality, conscience and code, even amongst each other. Dirty, scurvy-ridden, lacking in habits of hygiene, burned to leather by wind, sun, and sea. Not a consideration for any man - driven by greed and lust. Loathesome, rotten-souled cads that would turn your stomach at their very disposition, let alone their very smell.

In reality, would I have been drawn to these men and this lifestyle? Hardly. Despite the fact that in an odd twist of irony, one of history's most famous women pirates by the name of Grace O'Malley, was a descendant of the family which once ruled Ireland's Clew Bay region :), I don't think I'd have been seduced into the path of piracy. 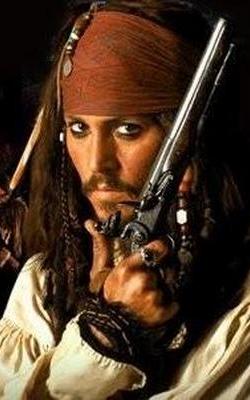 Regardless, I am afforded the option of turning to the pirates of literature and movies. Handsome, chiseled, sultry, seductive rogues who brandish swords and trail sashes. Adventure draped in mischief and scoundrel, but deep down anchored with loyalty to comrades and Robin Hood-like backwards justice. Smelling not of body odor, rotting teeth and illness - but of leather, musk and rum. All handsome, romantic underlaid ruffians who would sweep a girl literally off her feet while swinging from a mainsail line. Those were the men of my dreams since I was old enough to have a crush.

In my sensible woman's head, even with the romantic view of a life under the Jolly Roger, I would never opt to follow either my own whimsies nor pursue a man under spell of the sea.

But in my girl's heart - here there be pirates.

Aye Matey, I may have to go see this movie myself and view what is so rakish about these priates that has you in such a stew!! LOL

Ahhh ... I love the way you write! Where can I get copies of your novels? ;) You draw me away into another place ... into another time ... in a pleasant way ... and gently bring me back to reality ... thanks for the diversion from living in reality to "Handsome, chiseled, sultry, seductive rogues who brandish swords and trail sashes."!!!!!

Ah. movie pirates are the best! Unless they're played by Errol Flynn; then they're rather like walking cartoons.

Ok, I was going to try to talk like a pirate but it just wasn't working! LOL!

You had me at "Leather, musk and rum."

The writing contest you've been waiting for. Come visit my page.

I never saw the first one! I wanted to but never got around to it and then when I saw the 2nd one was coming out I REALLY wanted to see the first one so then I could go see the second.
I still haven't gotten to it.

Johnny Depp is HAWT tho!!! Loved him since his 21 Jumpstreet days! ;)

Have I told you how glad I am to see you posting again?

Loved the first one!

Glad you're back Clew...and I see your writing hasn't changed a bit.

Oh...and hop over to Nelly's and look at that compliment I paid you.

I haven't seen the first one. I heard it did well at the box office over the weekend. Johnny Depp is a great actor. I saw a portion of his bio on A&E. He likes to extend himself and take on different type roles. He actually turned down the lead role in Speed because he didn't want to be typecast.

One of the channels (Discovery maybe) did a segment last night on the history of pirates. I was unable to watch it but maybe it will be on again.

Beautifully written. And yes, we all seem to love "bad boys", to the eternal lament of the good ones.

Shiver me timbers! ;)
We do love Bad Boys - or at least this Good Girl does. Although Pirates weren't my fancy. Biker guys are. ;)

haha thanks! who could resist Johnny Depp?

Welcome Back Clew. Great post. I have been thinking about going to see this movie. After reading your post, Aye now I can't wait to get there :)

I'm with Itchy!!! Can't wait for date night...hubby and I will be off to see the pirate that steals my dreams :)

I haven't seen it yet, but I can't wait! And I don't necessarily have a thing for pirates...more of a thing for Johnny Depp.

You're right about the stench. When I was a pirate, everyone was really stinky. It wasn't so bad after a while. You just sort of got used to it.

About 200 years ago me ancestor sailed with Jean Lafitte. That's not a lot of time nor family separating us.

I'll not mention my weakness for rum anywhere. Nor leather. Oh, yes... leather.

Again we have a lot in common. I'm totally with ya 100% on this with everything you said. Pirates seem great even though in real life I'm sure they weren't. But like genius says you can't go wrong with Bloom and Depp :-).

I'm so glad you dropped by my blog or I might never have found yours. You have just put my feelings into words I could never craft. And I thought it was all about Johnny Depp. Now I know, I, too, am a pirate at heart - minus all the yucky stuff, just the romance and adventure. (I rethought POTC II and know I was disappointed at the end because I didn't know there was a third one coming out. I didn't want it to end.)

I cannot wait to see this movie. Loved the first one, and Johnny Depp is my alltime favorite.