“Being unforgiving is like drinking poison,
and waiting for the other person to die.”


Much like the old poem finding occasional rebirth, now and then a certain quip will burst forth from the mundane dialogue of life as the most poignant morsel of wisdom.

This is a line from this past Friday’s episode of my favorite TV show, “Ghost Whisperer”. As I’ve mentioned before, I love ghost stories. And I mean * LOVE * ! Ghost stories! If you love ghost stories too check this show out. Anyway, last week’s story involved a man of, let’s say, undesirable character, who had died and sought to relieve a personal burden by seeking forgiveness for some offenses before he could leave this world. He had made the above statement, a realization that had come to him all too late but was soon enough for him to pass to those he was leaving behind.

I have mused about forgiveness before, but this quote brought it all back to me in a new voice. It is difficult to forgive someone who has deeply hurt us, even altered the paths of our lives with their actions. I work hard at my battles with this very thing. I only have a few storms in my life of which I can’t seem to fully shake the resentment – but man, are they powerful. I say I forgive, but with those few experiences I will sometimes catch myself returning to feelings of bitterness and anger when I think upon them. I’ve often thought of unforgiveness as a veritable pair of cement shoes, preventing me from moving on to happier days while others, including those who hurt me, leave it (and me) all behind them. 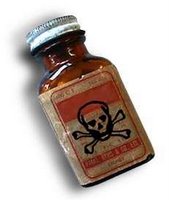 But to put the concept of unforgiveness in these terms – the metaphor of a grudge poisoning you yourself rather than the person who hurt you – is, quite simply, perfect. Just a perfect description. We like to think that sending mental daggers at those who have hurt us is beneficial – somehow assembling a signpost so that bad karma will find them. But to not forgive really doesn’t affect the offender in any way. Chances are, as the resentment eats away at your heart and soul and you harbor the bitterness years later, the offender has moved on and all but forgotten the entire event. Meanwhile, like a runaway kidney stone, the grudge calcifies your insides. Sometimes people even forget how to separate their hard feelings for one situation from all the rest.

So what’s the purpose? Just to poison yourself?

Even putting the teachings of my personal faith aside (which indeed commands me to forgive if I expect forgiveness from the Almighty), the ability to forgive those who have broken my heart in one fashion or another is emancipating on multiple levels. The shackles of a grudge weigh down no one but the harborer, and the venom only turns back on them and their own present life and immediate company.

I don’t want that. I don’t know who would.

Forgiving isn’t forgetting, and it isn’t saying what someone did was all right. But it does release the power the offense holds over me. No doubt many tasks of forgiveness take some time and great amounts of effort. But as this quote captures in its simplistic simile, it’s a goal well worth pursuing.

The next time the bitter bile of a grudge bubbles up within me, I'm going to remember this new perspective, and work on detoxing myself.

Oh Clew! How very often I have thought that I too have forgiven someone only to find that it still bothers me terribly. I have thought about it hurting me to hold onto the grudge more than it hurts the other person....but then I forget about it for a while.

Thanks for the reminder. I will now work on "letting go"!

So very true! My dad (a former minister) used to say that when you focus on what you don't like in a person (what you can't forgive), you often take on that characteristic. Another part of that poison at work.

My husband was watching that show while I was in the other room painting, so though I couldn't see it, I heard that quote. My sister had heard that very same thing several months earlier, so it really stuck out to me, too.

Along with that quote is one I also have thought of often:

"Life is too short to be concerned with yesterday's nonsense". How very true! Even though we are hurt by someone else, holding onto that is doing nothing to them, and everything to us. Not to suggest "revenge" by any means, but letting go of anger and learning to forgive is to let peace re enter your soul; exactly where it belongs.

Thanks for the reminder...

Although I feeled compelled to think less of you for allowing Jennifer Love Hewitt to have so much control over your life, I can completely sympathize with you here. I too have been moved by the stupidity of pop culture.
****COUGH****
Groundhog Day
****COUGH****

But I also think a big part of that is it comes to us when we're ready to hear it. I'm sure you've heard hundreds of parables about the self-destructive nature of resentment, but this one was the right message at the right time in your life.

so many people forget forgiving isn’t forgetting. that is a good point.

The power to forgive is one which is hard for many to master. Yet you are so correct, in that it harms he who harbors it more than he to whom the anger is directed.
The chains of this angst weigh heavily upon our souls until we can loosen our bonds and become free. However, only WE hold the key to these locks...
And if we cannot forgive, how can we expect to be forgiven for our trespasses?

Lesson of the day for me. I am going to need to ponder this. Thanks Clew.

This kind of hit home for me because I hold grudges.

Nicely put Clew. I often say that while I'll always forgive - I'll never forget. With family, it's different. I don't even remember that stuff! But with friends....hmmm. I'll forgive someone who's done wrong by me and to me...but I'll always think differently of them.

You're so right. It's not good to keep that anger and resentment inside. It IS toxic.

Clew, I admit forgiveness aint easy. That being said, it aint impossible either. I follow some basic principles to help me forgive:

• Concentrate on how God forgives me.
• Compare my offenses against God to how I was wronged.
• Ceremoniously dispose of a grudge.

I bury my grudeges in the compost heap. Some folks light them on fire. Rites of passage are important to me. They fix a date and event to this abstract concept.

That works for me. You're on your own.