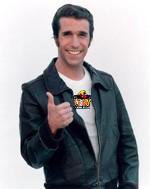 Sometimes it would be really useful to go back in time and give the younger you a good talking to.

When I was in middle school, I desperately wanted to be liked. I didn’t care if I was super popular, I just wanted to have a nice group of friends and have most people in general like me. Well, it didn’t work out that way.

See, young teens, especially girls, can smell this desire on one of their own. If you look a certain way and act a certain way and have certain hobbies and wear certain clothes, you will be accepted. If not, you are an outcast. And if you’re really unlucky – say, you’re awkward, or have bad skin, or your mom buys you off brand clothes because your folks are trying to put your brother through college while still saving for your education as well – you become the target. There was a point in my life that I was teased and picked on mercilessly every day. And I never let them see me cry, but I did. I cried every day.

He has asked me in the past, why didn’t you fight back? To which I have no real answer. Mainly, I suppose, because I knew I had no chance against a whole group of girls. Boys fight more honorably than girls – when boys fight, the rest gather and watch. When girls fight, you go after one of them and the other twenty jump in and rip your hair out too. But honestly, I think I was just taken aback. I was a nice girl, raised in a Christian home. You were supposed to be nice to people, even if they were mean to you. Nobody told me about the part where it just gets worse and worse.

By the time I got to high school I had grown out of my ugly ducklingness, and had developed a really nasty attitude about a lot of things. With my boiling point reached and my new confrontational attitude locked and loaded, things were much different. I made friends in my new school. Not the kids I went to middle school with, but I didn’t care about them anymore. I had boyfriends, something they said would never happen to me, and I was part of a pack. I found my guts by then and told them all to kiss my a$$.

It wasn't until college that I finally began to learn how to let go of anger and become my own friend.

I’ve learned to pick my battles now. I’ve learned temperament and distinction between what really matters and what really doesn’t. I’ve thought many times about what I’d say to the younger me, could I cross back into past chapters of my life.

I have never quite definitively decided what I’d say, though. Nor if it would even make a difference.

Oh, how I remember those days. In my school, a small podunk farm community, the girls in my class could never get along. Never. I was like you, the target of one stupid reason after another and never let on the inside. The top dog who usually targeted me, was my own cousin.

By high school I had adapted a kick butt additude and no one messed with me again. So much so, that boys who'd considered asking me out were too scared too. My Dh who I dated then, eventually cut through the crap and taught me, it's not what other's think about you that matters.

In college I still ran into that back stabbing high school mentality, and to avoid getting sucked in, I just walked away. The sad thing is, those girls of yesterday, are the women of today who still use these same tactics and it's sad, because no adult trusts them or cares to be their friend.

And me today, I have a group of friends I'd never trade for the world, who like me, wish we'd known each other way back when.

Girls can be so cruel. Though my own daughter has gotten teased, I'm so proud of the kind of girl SHE is..sticking up for the underdog and being her own (and wonderful) person. Hurray!

Have really missed you! I wrote a quick post to update and though I'm not sure how often I'll be able to comment or write, know I'm thinking of you. Hugs, gf!

What might have been aint ever going to happen. Do you have friends now? Good.

I wasn't in the "in" crowd in school, but it never bothered me! I don't know why it didn't....I think I just didn't care what they thought....hmmm, I still don't! I guess I'm just a fiesty old lady with a "tude!

Oh, I was the saaaaaaaaame way! But in highschool I determined I was going to fight it and win, and I did. The best revenge is living well, as they say. It was sweet to be the popular kid and shun the former bullies for the losers they were!!! I was also the popular kid that was nice to all the geeks.

I think you should go back and give young you a bear hug. Look what a wonderful person those experiences turned you into!

First, LOVE the picture of the Fonz. That guy just cracks me up.

And second, the question of what would I say to my younger self and would it even make a difference?

I've decided that my younger self has no business knowing what I (as the older self) know. She's got to experience it for herself in order to really and truly learn.

Plus, there is that whole time/space continuum aftermath to deal with. Ugh! ;)

I've enjoyed getting to know our babysitters over the years. Often we would spend a lot of time talking when I took them home. I told them many things, but the one thing I always told them was this:

What you do now will affect your life forever. I know it sounds strange to you when you're young, but you know what all the adults my age end up talking about? What they did in HS or JrHS or what happened in grade school. Think about your choices; make sure they're ones you really want to live with for the rest of your life.

I've always found it interesting that no matter how old one is, we always talk about the years before graduating from HS.

I don't know what I'd tell the young me, but what I try to teach my girls all the time is that it's not all about them in this life; that their choices matter; that the friends they choose matter; choose wisely; there are consequences to every choice you make: good or bad.

It's a rather interesting writing exercise to write a letter to your 15-year-old self (or whichever age you prefer).

Of course, even if I was able to send my letter back in time, my adolescent self would probably have ignored it. I was more than a little stubborn. ;-)

I left a lengthy comment here last night, but the blog fairy must have eaten it. Hahn!

Hmmm. Something I can totally relate to. It was only the 5th and 6th grade that I had an issue - it seems that the biggest girls always tend to "pick on" the smallest ones. I always stuck up for myself and defended myself -and I too, never let them see my tears.

I'm not looking forward to the day that I may have to help my daughter with the cruelness of other girls. But at the same time, to a small extent I hope that I do have to - because I certainly don't want her to be one of THOSE girls who weren't nice to me. Actually, in an ideal world - she will be a girl who is kind and nice to everyone - and whom everyone will be kind and nice to in return.

Youth is wasted on the young! If I knew then what I know now, I would have been impossible to live with...

I couldn't have put this better if I had written it myself.

I didn't fight back either...and I too cried every day.

I bet we're better friends with ourselves now than they are, Clew.

I just HOPE that my daughter doesn't get in the "Hip" crowd and make others feel left out. I was one of those people who got left out and laughed at for clothes and not being popular until my Senior Year when all of those "Hip" gals thought they could all be friends with me. Like something magically changed our Senior year and I would talk to them now.....fat chance girls! I was picked on for clothing, being skinny, a "Hood" at times, not in the "In Crowd" and so on. Like my image of those girls would change our Senior year just because we all should "Be Friends" for our last year together. Hummmmmmm Bug. Those girls all ended up doing nothing with their lives and had kids at an early age and they all still live around my old neighborhood. HA! I hope my daughter is one of those girls that fits in to any group and never makes others feel as bad as I did though the years.