I've never been fond of dolls.
Much of that has to do with my growing up as a tomboy, I'm sure. But it's more than a simple disinterest. Dolls in general give me the creeps.

Some friends of ours make fun of the Hub and me when we visit them. One of them had a Charlie McCarthy dummy when they were a kid, and the very thing is sitting in their guest room as a (subjectively) charming Americana-esque decoration. The Hub and I both decided we couldn't possibly sleep with that thing in the room with us. Our friends were highly amused as they removed it, and to this day whenever we visit, joke that they are going to throw it on us as we sleep. Thankfully they never have, as I'm quite convinced my heart would stop then and there.

Charlie McCarthy himself doesn't scare me. In fact I always loved those Charlie and Edgar routines when I was growing up. But to have the doll just sitting there - staring at you - grinning that freaky grin -WTF!

Clowns on the other hand are a different story: ALWAYS scary, no matter what. Remember in the movie "Poltergeist", when that awful near-lifesized clown doll went evil and pulled that poor kid under the bed? Geez, what could be scarier than that? Clowns are straight out of hell as it is, and clown DOLLS are the worst. Remember this guy? Cheese and crackers. EASILY the scariest thing in the whole movie for me.
But probably the ones I find most disturbing are the ones that look freakishly realistic. Real hair, rosy cheeks, rosebud mouths, serene expressions and awful, huge eyes that often "blink" when you tilt them back.

Look at them. You can just tell they're quietly plotting a way to kill you when you fall asleep.
Probably what started it all is in my very house this minute. My Great Grandmother's doll, which I inherited when my Grandma passed away a few years ago. I have a love/hate relationship with this thing. On one hand, I really think it's neat. It's got history, and was loved and treasured by Great Grandma when she was a girl in the mid-to-late 1800's. It's really cool to have something like that in your hands.
On the other hand, it's a horrifying thing, particularly for one with a doll phobia to begin with. I can remember when I was very young, my Grandma brought me to her old trunk to show me something really neat. She pulled out a small enshrouded object and gingerly unwrapped it as she told me it was her mother's dolly from when she was a little girl.
From out of the swaddlings came the scariest thing I'd ever seen. Matted hair, crackled skin, broken fingertips, and the most horrifying giant lapiz eyes that pierced right through my impressionable soul. 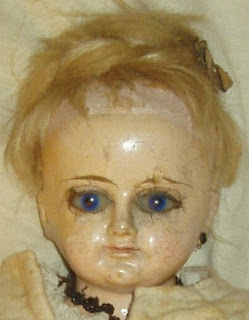 "Isn't she pretty?", my Grandma asked. I swallowed hard and forced a smile.
I held it together through the experience, but was indescribably relieved when she put it back in her trunk and closed the lid tight.
As I laid in the rollaway bed in her living room that night, I couldn't get that doll out of my head. I knew it was locked safely away. But I could feel it still staring at me. Through the material she was wrapped in, through the trunk, the paint, the plaster and the rafters between us, she was staring at me. I knew it.
As the years passed, I managed to file the demon doll in the back of my psyche, and then she came back to me. After Grandma passed away, my Dad asked me if I'd like to have it, and seeing it again gave me the same jolt. It was still as creepy as ever. But I took it. As I said previously, she's a family heirloom and a historical treasure. She was around before cars. Radios. Light bulbs. She's neat to have.
I still keep her covered and stored away. Far out of sight.

The other night I took her out after a discussion about dolls with a friend, and to my shock, her face was uncovered and she wore the cloth she is always wrapped snugly in like a shawl. Her stare straight into my eyes when I noticed nearly made me drop her.
Apparently, she's still watching me.

You are not the first one to be afraid of dolls and clowns and clown dolls! I know many who also have this fear. I am not one of them.......even though I was also a tomboy, I love dolls....especially the baby dolls that today look so lifelike and make me think I'm holding a real baby. When they put me in a home for old people, plese make sure that Mims brings me a life-like baby doll, k?

See, I didn't laugh or make fun of you! Hugs and miss you!

Ash just walked into the room and said "WHY IS SHE THERE? IT'S LIKE SHE'S FOLLOWING PEOPLE!"

If I have nightmares tonight, I will blame it on you. I will never look at a doll the same way again!

My dear, I can't even tell you how amused I was while reading this! I was literally in tears! All I can say is, I could not agree with you more! How true, spot on, creepy, and hysterical!!! You made my night!! Love ya!

My God are those real human eyes? WOW! Scary! I feel the same way about dolls and clowns. Statues too. I just keep expecting them to open their eyes and start moving. I get chills just thinking about it! Thanks for the nightmares I'm gonna have tonight. SHEESH!!!

BTW - who do you think is dead on Ghost Whisperer? I can't decide. Hubby even had a dream about it!

That last pic scares the heck out of me.

When I was really little, I had a gypsy marionette that used to hang on the doorknob in my room. It gave me nightmares.

As an adult, I had this large ceramic doll figure that my mom made. I had to put her in the closet facing the corner because she freaked me out. I finally had to get rid of her--even though my mom made her. Sad but true.

I've always loved dolls, but I have to say...you have a real creepy collection there! I can definitely see why you have this hate relationship. That last one gives me the heebie jeebies. But I promise you...there are some sweet and pretty ones out there.

That thing is freakishly freaky! Heirloom or not, I would not have taken that doll. That is the stuff horror movies are made of!

Remember the clown from Steven King's "It"?

I don't even want to discuss this anymore!

DUDE! I couldn't even look at the last picture or read the rest of your post! That last one scared the F*C* out of me! I'm going to have nightmares tonight...thanks a lot! ;)

OMG. Your G-Grand's doll is freakishly freaky! I so would have nightmares as well!

Can you post something different please! This is freakin me out still! ;)