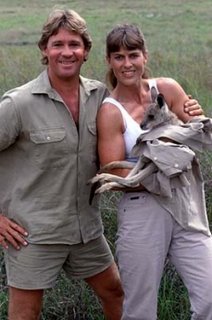 “The Crocodile Hunter” Steve Irwin died today. Contrary to what you’d think, he was not killed by a crocodile or snake, but was stabbed in the chest by a stingray barb while filming a documentary. Stingrays’ barbs are venomous but cause more discomfort than mortal danger. Deaths caused by ray stings are very rare. But Irwin was not killed by the venom - in a strange twist of improbability, the ray’s barb pierced Irwin through the ribs and subsequently punctured his heart. He was 44 years old and leaves wife Terri and two young children behind. 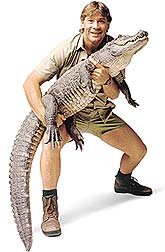 Since we moved to the country, I have not watched the Crocodile Hunter. Our new cable system does not carry the channel on which his shows air. But I used to love watching him and his manic ways. He was fearless yet respectful. He cared about nothing more than raising awareness for wildlife and coexistence. I can see how he might get on a lot of people’s nerves, but I always got a kick out of him.

I was sorry to hear of Steve Irwin’s untimely death. But you can’t ask for more than to go doing what you love doing. And that he did.

Rest peacefully, Croc Hunter. Thank you for all the fun.

Thank you for posting this tribute. I was terribly saddened when I heard the news this morning. He truly educated the world...not only about animals...but also about pursuing your dreams.

I am too sorry to hear of his death. I liked watching him - he was so lively and thrilling.

I had not heard of his passing til got here.

He cracked me up!

Very nice of you to post this. I, too, was saddened to learn of his death.

I had heard this news earlier today and was saddened by the sudden passing of a young man with small children and a wife left to try and cope with his absence. He was an interesting and knowledgable man!

I hated the news as well. Although I poked a little fun at him, I admired the man's braveness at everything. Whether big or small...he was only too happy to touch whatever it was.

Very nice, Clew. It's so sad to lose someone with such passion for what they did, especially when they shared that passion with the world.

Absolutely. How often do people get to die doing what they love? I hope his last thought was "Wow, it's so amazingly beautiful here....".

While untimely and tragic - we should all be so fortunate to go quickly and while doing something we love.

Hmmm. For some that might be while eating chocolate! hahaha. ;)

This made me sad. I feel so bad for his wife and children. I really think he was a great man!