Incrediboy's got a birthday coming up this month, and now that he's in preschool it's become a nice little tradition for all the kids to have a little something special for the class (provided by their parents) in honor of their birthdays. This has varied from simple little gift bags to hats and noisemakers to a party at Chuck E. Cheese. The latter from which I'm still recovering.

I had the idea of providing a pinata for his class, but after asking his teachers if this would be okay, they decided to have a pinata for the kids at Halloween. Thanks for stealing my idea. >:[ 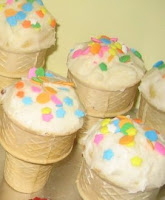 So last week I just so happened to run across the greatest idea in a magazine. ICE CREAM CONE CUPCAKES. Have you seen these? You take flat bottomed ice cream cones and fill them as you would a cupcake tin. Place the batter filled cones on a cookie sheet and bake according to the box directions. When the cupcakes cool, ice them and add decorative sprinkles. Then you eat them like an ice cream cone! Kids love them because they're fun, and they are (supposedly) much neater and easier for little ones than the traditional paper cup peeling action of regular cupcakes.

And honestly ... how CUTE are THESE!?

Apparently this is not a new idea, as I've since found many people who are familiar with this technique. But I'm pretty excited. I think they're adorable and fun and I can't wait to make them for Incrediboy's class.

I'm pondering the possibility of making up a little party favor bag for all the kids too, but frankly, I already have an inordinate amount of stress going on in my life right now. The ice cream cone cupcakes may be it for preschool this year. And trust me, while I consider myself a pretty fun Mom, Suzy Homemaker -slash- Party Coordinator is a role I find challenging to play. I'll consider myself doing pretty good if I can pull these off and get them to class without destroying them in the process.

Maybe I should make a test batch. You know, just to practice.

Cute idea! I've seen these, but never tried it. As with regular cupcakes, expect the kids to eat just half! Test batch sounds like a good idea - you know, for research!

Gee I wish I were closer to help eat the test batch.

To answer your question, this is the first I have heard of ice cream cone cupcakes. What a fabulous idea!

Cutest things I've ever seen! So creative! I wouldn't have expected anything less!!

These are cute...and have been around since you and mims were little!

A little tip for transporting these babies...........cut holes in a cardboard box (egg box, using the side only) make a perfect way to get them to school without them tipping over.......just cover with something that you can keep off the tops. Good luck........and make sure they are all filled to the exact same height before baking. I've actually done these........many, many moons ago!

These are cute ... but if it all boils down, hop into your local grocery store and pick up some cupcakes ... the kids won't know the difference :)

I'm not a big fan of overdoing birthday parties, either, and we live in an area where parents spend hundreds of dollars trying to give their child just the VERY best party. UGH.

Once they began grade school I began a tradition of having their birthday parties at my house right after school till dinner time. That way, my child doesn't have to wait long till the party ... the waiting time is at school where I don't have to hear about it all day ... the kids come in, eat a snack, run through the party, and the parents are always on time to pick them up for dinner :) Then, the party's over, it's dinner time, bath and bed! WaLa!!!

At one for my Youngest a few years ago, one mom said, "Is this it?" And I was thinkin ... you mean, am I taking the whole crew to the theater and treating them to a movie, which they won't watch, and a kid's pack of whatever, which will end up on the floor, and a party afterward, where they will be so overloaded with sugar that we'll just dump some more in? NOPE! Not for me ... especially at FIVE years old!!!!!!!

I think these moms need to get a life ... really.

Hi
Thank you for the greetings.
May I have a cup please :)

I've never heard of the ice-cream cup cakes. Sounds like an unforgettable snack. Yeah, I say go for it! They will love them.