A Dog and His Boy 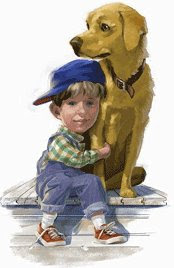 In a rare - and I mean rare - event, Incrediboy spent the night with Grandma on Friday for only the second time ever. Hub and I had a chance to go to a fancy dinner downtown with some associates, and then to an NHL game. The evening would run late, so a campout at Grandma's was a blessing. We slept in liesurely with Most Beautiful Dog until almost 9 the next day.
We took advantage of the boy-less Saturday morning to get Incrediboy's new bunk bed together. The sizeable new piece of furniture required a redesign of the room's layout, so after getting a quick breakfast, Hub and I headed in there to start tearing down and rearranging.
We began with clearing out many of the long outgrown baby things (like the playpen we've been using for a toybox/catchall for well over a year now) and moved on to disassembling the crib. MBDog began hovering around the room, gradually getting more and more clingy. As we had one of the four sides of the crib removed and were working on the rest, MBDog slinked into the negative space of the frame, sat down and gave us a droopy-eared, saucer-eyed, questioning look. This continued throughout the morning - MBDog becoming increasingly more solemn and troubled. I'd stop and stroke his head, asking him what was wrong. He'd just gaze at me forlornly. He looked as if he'd lost his best friend.
After a while, Hub paused thoughtfully, and said, "I wonder if he thinks we got rid of Incrediboy?"
Now there was something that hadn't occurred to me. Incrediboy never spends the night away from home unless we're all gone. And with Mom and Dad taking down the boy's "crate" - it was understandable that he might be wondering that.
Some might say that perhaps we humanize our dog too much. But I can tell you that he most definitely was extra excited to see Incrediboy walk through the door again later that day. It was really very sweet. One of God's greatest gifts - to, as a child, be loved by a dog.

I think dogs do have many human traits. I sadly remember the time I had to take Dougs' dog, Diablo to the animal shelter as we were not allowed to have two dogs in the mobile home park we lived in and Doug was not allowed to have him where he was renting. We tried and tried to find a home for home but failed miserably. I loaded him in the car and took him away and came back about an hour later without him. My dog, Prancer, would not get in the car with me for about 4 weeks after that..........I think she thought I would take her somewhere and she wouldn't come back either! They are certainly not dumb animals. I still miss Diablo! :(

Dogs do notice and question things. The more intellegent, the more 'human' they seem. There are just too many positive and incredible things about a good dog to mention here. IB is lucky to have MBD.

Second - awesome post. And it's so very true, there are fewer things more precious to see than the love between a dog and a child.

What a sweet story! We're on a short list to adopt a Westie from a local vet - keep your fingers crossed!