It's a Gray Area

I'm one of those people who likes gray hair. I'm not talking in an "oh, baby, bring your gray head over here and ravage me" kind of way (although that's been known to be the case - I'm not mentioning any famous actors' or singers' names - if you know me, I don't have to - ah, I digress) - but in a general, asthetically pleasing sort of way. I don't necessarily think gray hair can make one look old. To me, it says you've lived some life - have stories to tell and mysteries to not. 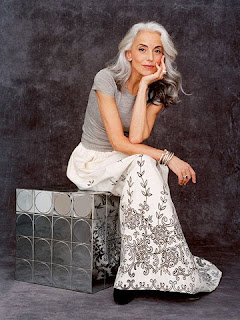 Take this lady here, for example. I mean, her hair is beautiful. SHE is beautiful. I would love to just sit with her on a big cushy couch and talk. I bet she's got some great stories to share.

Until somewhat recently, I have regularly dyed my hair since I was about 14 years old. Not because I'm trying to be someone I'm not, but rather just having fun with who I am. To me, hair dye is an extension of makeup - used to accentuate. When I realized how many women dye their hair for the sheer sake of covering gray, it seemed odd to me. I'd tell them gray hair is cool. I'd receive a reply in the form of an unpleasant face, and a look letting me know they doubted my sanity. "You'll change your mind when you get them," I'd usually hear. I was never so sure about that.

I always kind of looked forward to getting some gray hair. It adds so much character. Ironically, I come from good hair genes. My people are late grayers.

When I had Incrediboy, I stopped dying my hair. I just didn't have the time (nor the interest) to keep up on non-necessities. My color grew out and for the first time in twenty-some-odd years, my locks were au naturale. I did dye it again last summer, just for fun - but haven't since.

Now in my fifth decade of life, my hair is still independently chromatic. Even my temples, which I understand have the tendency to gray first. When people find out how old I am, they don't believe me when I tell them I don't dye the gray away. They're just jealous. ;)

I have noticed an occasional silvery glint on the top of my head recently, though. Just a strand or two - enough to catch the light a certain way. The Hub, a few years older than I, is also a "good hair gene carrier" and is only now starting to get the occasional silver strand. He's mortified, and pulls them out when he sees them. He wonders why I don't do the same.

I don't because frankly, I think they're neat. :)

my husband has gray hair, and i LOVE it!

Gray hair looks distinguished. As it should, because with age comes wisdom. If I had hair, it would have gray in it.

shucks, i do not have any hair. Thanks for stopping by my place.

I still color mine, but I know there's a good bit of gray underneath. Not enough to call me gray, just make me mousy. When it's mostly gray, then I'll think about it.

I'd add one to your short list of sexy gray-haired famous types.....Sam Elliot. Yummy!

I found graying hair (at least on the sides) made it easier to be taken seriously as an attorney. I consider that a plus!

So happy you stopped by my blog! I look forward to getting to know you...

Thank you for stopping by my blog and joining my madness...er... I mean following me! Great post! You know, I was mortified the first time I found a gray hair. Now I just don't give a shit! I dye my hair blonde, because I like blonde. If the gray peaks through, I am cool with that. If if it doesn't peak through I am okay with that too!

If you like gray hair, then I must make you salivate. My gray hair has gray hair. My beard is gray. But, then, I’m older than dirt.

Oh yes I think so too. It makes people look seasoned.

I think gray hair is pretty too, and I'm also a fan of wrinkles. The deeper and bigger, the better. So much character is expressed through them...makes you want to make a pot of coffee and curl up on the couch next to them for some good conversation.

I love the gray in Mr.4444's hair; I think it's hot. I don't have any yet, though my natural color is so dull, I've been highlighting it for years. I think white hair is cool, too; I think it's beautiful.

Did you write this post to make me feel better about my silver/gray hair. I gave up coloring it a couple yeats ago since I keep it short and it grows so fast I have to have it cut every 4 weeks. I'm the only one I know that when I color my hair, my roots grow in lighter than the rest of my hair. But you know what.......? I'm kind of proud of this sliver/gray hair now..........I have earned each and everyone of them........as you well know, knowing us as well as you do! But thanks for making me feel better, I have been feeling rather down lately and this post was a small 'perk me up'. Hugs and hope to see you soon and don't forget my hugs! Love ya!

I WISH grey hair didnt bother me... I found my first one while at work & I literally ran out of the bathroom CRYING!!! Had to call my husband & I was sobbing - he thought someone had died...

Yeah - my attitude is opposite of yours :) Do think grey hair looks great on some people.. me, no thank you!

Finially got a chance to check out your blog. What a post to land on.

My Silver/White started showing up when I was 8 as an inherited streak on the right-side of my head right where I part my hair. My Mother told me she had always had one on her left-side where she parted her hair.
In my early teens I gave up dying my hair and then about 15 years ago I tried it again as a blonde but quit after 2 dye-jobs because the chemicals made my head burn. And, I looked just pain silly because my skin color did NOT go well with the blonde hair.
So from that point on, I have had it "O-Natural-ell" and make certain that its beauty shines.

I don't quite have the same feeling as you. Gray hair on other people does not bother me at all, most of the time I think it looks nice.

But ME??? I think not! My people gray at a young age. My mom had ALOT of gray at age 30 and lucky me, I inherited the gene.
I. HATE. IT. I color my hair every 8 weeks and usually that isn't soon enough but it's all I have the time and money for. I have ALOT of gray hair. Ick.

I'm with ches.....gray hair on other people is fine. I don't have gray hair, I have "new growth". I would imagine, at 42, that I'm 50% gray. My mom is 65 and is probably less gray than I am. My dad turned gray (beautiful silver hair) early. I've had my hair professionally colored for years; recently I started coloring it myself. That has been an experience. Maybe one of these days, I'll share your attitude, Clew, because I certainly don't want to be 90 with an ugly dye job.

Some people gray gracefully - like that model you posted a picture of. Others of us do not.

You can go your own way, my friend. But as long as I have the money and the time, my gray goes away.

P.S. Let's touch base on this topic in five years and see how you feel then ....