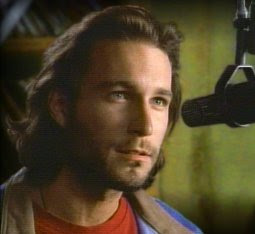 So there is this actor guy named John Corbett. Do you know him? He used to be on this TV show back in like 1990 called "Northern Exposure". The storyline follows newly graduated medical doctor Joel Fleischman, who sets up shop in this isolated speck of a town in rural Alaska. It was a cute show.

Okay, I'll be honest. I mostly tuned in just to get an eyeful of the local philosophical ex-felon disc jockey, Chris Stephens (see above). But if he told me he was a doctor too, I wouldn't question him. In fact I'd be the biggest hypochondriac around, just to have an excuse to go see him all the time. 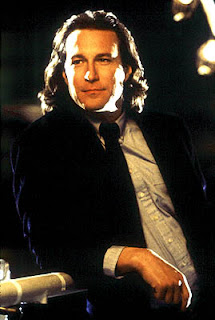 After the show went off the air, I kind of forgot about John Corbett until a funny little dark horse comedy called "My Big Fat Greek Wedding" came out. Corbett played the exceedingly charming, too awesome to ever exist while simultaneously being single and straight, Ian Miller (left). I love that movie, BTW, and not just because John Corbett is in it through the whole thing. It really is a funny movie. You should consider renting it if you've never seen it.

So anyway, I kind of started crushing on ol' John again. And who could blame me?

He's been here and there over the years since then, including spots like showing up as Aiden on the way-too-chick-show-for-me-to-ever-admit-I-watch, "Sex and the City". By jingo, I'd watch THAT, though *pointing at Aiden*. And Carrie is a moron for not keeping him.

So my girlfriends and I got on the subject of John Corbett the other night (imagine that) while we were hanging out on Facebook. I was talking about how hilarious the Greek Wedding scene is, where he's goofing around outside the window and the old lady clobbers him with her purse - and I thought I'd see if I could find the clip on Youtube. Well, I didn't find it, but I *did* discover that John Corbett has been working on a music career in recent years! 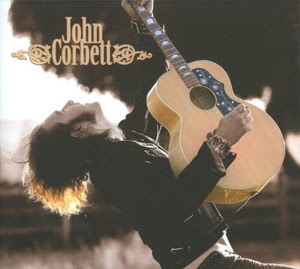 I listened to a few clips, and you know what? He's really good. I mean really! Even if I close my eyes! Best of all, his style is kind of a fusion of blues, southern rock, and tiny bit of country. ... A very tasty cocktail indeed.

Well, immediately, I hopped onto Amazon and looked him up. The CD is out of print. DRATS.

But! There were a few used copies being listed in the Amazon marketplace! YAY! So I bought one straight away for $2.94 plus shipping. I can't WAIT to get it!

I'm sure the Hub will be thrilled with this latest acquisition.

Oooooh gawd, that man's voice does things to me! The Princess and I LOVE "My Big Fat Greek Wedding." I think I own a copy, but still watch it every time it's on. Got a zit, a rash, an achy joint, broken bone....PUT SOME WINDEX ON IT! LOL And her brother teaching him Greek.....

I can't believe you're just hearing his music. I love his song "Good to Go." Jason Aldean did a cover of it, but John's is better.

I figured I was way behind on this. WHY DIDN'T YOU TELL ME??? Some friend you are! ;)

I watched Northen Exposure once or twice but never really got into and I have never seen Big Fat Greek Wedding.
So I guess I can't really say a whole alot about Mr Corbett.

But you know I love muic and I wouldn't mind taking a listen to his stuff. :)

I'm so far behind that I have never heard of him. I didn't watch his tv show and I just watched MGW becasue the wife wanted to see it. So he doesn't give me pany-puddin. Know any good looking women?

didn't know about the music, though ... like the cocktail :)

You're so funny. He is pretty cute, though :)

He's really not my type. I'm more into Martha Stewart and I think that's a good thing.