The Duck and the Globe of Death 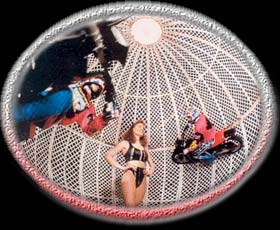 Have you ever seen the Globe of Death? That giant steel sphere, in which those crazy motorcyclists whip around the insides at a hundred miles an hour while some chickiepoo stands in the middle with a big grin, as if there was no place she’d rather be?

That was my family room the other night.

Some friends of ours brought over a gift for Incrediboy Monday evening before we all went out to dinner. It’s a duck, and when you squeeze its wing, it does a little dance and quacks out the most manic song you’ve ever heard in your life. (My OCD latched right onto it, BTW, and 36 hours later it’s still on a very loud, incessant loop in my brain. Remind me to kill my friends.)

Incrediboy loves it. And in its defense, it is very cute.

Most Beautiful Dog was outside when the duck made his initial appearance, so he didn’t see it at first. Later that evening we got the duck out again. MB Dog was immediately curious about the new item, and sniffed it with great intent. He is a sporting breed, and all things living and inanimate, large and small must be subjected to an intense investigation. Well, just as MB Dog was beginning to accept its presence, Incrediboy went over to it and set it off. It went into its raucous routine.

Well. MB Dog practically came apart at the seams. He knew it was Incrediboy’s toy and that he shouldn’t grab it. Such a good boy in that regard. But he just couldn’t take the excitement. His hunter’s brain flooded with endorphins and adrenaline. He began to shake – his eyes grew wide as saucers and he sprung around like a pouncing kitten, as close as he could get to it without actually touching it. Finally he began releasing his pent up energy by tearing around the room. Magazines flew. Train track pieces and Legos clattered about. He used the back of the couch as a catapult, building speed as he raced around the perimeter, practically running on the walls from his own centrifugal force. He hit the Persian rug. It curled and folded up on itself like ribbon candy, pushing the toy pile further into its corner with an incredible crash. All the while you could hear him snorting like a racehorse.

We eventually had to wrangle MB Dog down and corral him to his crate until he could calm himself. The duck went to Grandma’s for a few days, where Incrediboy can play with it during his week, free from the Globe of Death.

Had the room not been destroyed, it would have been pretty funny.

. . . and now Grandma has to be tortured with that Duck's song! LOL you're so delightfully evil. LOL

I've seen both your family room and your dog in action so I could picture this scene perfectly and with much delight, I might add. :)

Well, all things considered...at least you got rid of the duck for a few days :) I did have a good laugh though.

So what's going to happen to Grandma's house?

OMFG! That's freaking hysterical and so familiar. I used to have two beautiful German Shepherd who would react in a very similar fashion to anything like that. Anyway, thanks for dropping by my bloggy home. You can see that my recent cheek on Stephen's blog is a response to his cheekiness on mine. :-) Anyway, welcome to the family. Cheers!

That is hilarious! My daughter would have been beside herself with glee! She would have laughed so hard!

Hope you are having a good Wed Clew!

Actually, it IS quite funny! :p

If the duck ever makes it way back home you MUST get that renactment on video. What a hoot!

I've seen the Globe of Death thing you speak of at the circus. I wouldn't get in it for any amount of money.

I really wish I could have seen BMD's antics in response to the Duck...and I would have loved to have seen what remained of the family room. Did you take photo's?

How funny! Too bad you didn't have a videocam handy-- that's an "America's Funniest Home Video" waiting to happen!

I got a visual as I read...very funny. Thank you, I needed a good laugh!

Oh no that WAS funny!

You created a great visual with your words clew. :) Though a bit off topic, your story reminds me some of the experiences I had with my two pet birds. I found it so funny once when I bought the birds millet spray treats. Millet spray to birds is like chocolate is to people or maybe I should type women. LOL Anyway, I placed a strand of millet spray in the cage. Because it was a new object in the cage, both birds acted as if it would eat them instead of them eating it. LOL It was hilarious to watch them tip toe around the millet spray. One day, one of the birds became frustrated and bit at the strand to defend himself I guess. LOL When he did so, he realized...Ah- how tasty! It was on from there...chomp, chomp. LOL

Poor MB Dog. He got put in "time out" for just being him!

I would have loved to be there!