Not that I need to point this out, but I haven't blogged in a long time. It's not that I haven't wanted to, but inspiration just hasn't been there. Even recapping day to day things seems to be too bland. But - I miss it. So I'm going to excite you with one of my scintillating book reviews.

I don't read much anymore - and life's busyness (not to mention an insufferably short attention span) prevents me from finishing significantly fewer than I manage to start. But now and then I run across a book that I just absolutely fall in love with - nigh devour. 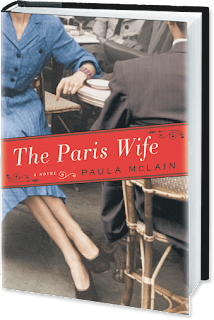 I was liesurely flipping through the Sunday paper last weekend when I caught a little writeup on The Paris Wife by Paula McLain. The story focuses on the events surrounding the meeting, courtship, and marriage of Ernest Hemingway and his first wife, Hadley - long before Hemingway was famous, and their life in Paris and other cities as his writing career blossomed and took off.

I don't normally go for this sort of book. I'm more of a ghosts and serial killers type, actually. But this one intrigued me. Perhaps it was that it is written in Hadley's voice, and I do enjoy stories told from the perspective of the less usual subjects (a la "Mary Reilly"). Mostly I think it's because the story is based upon letters she had written to Ernest. The first of his four wives - and only for five years, Hadley is remembered as little more than a footnote in Hemingway's mainstream biographical information - but he had kept all of her letters his entire life - a tidbit I find heartwrenching.

I will confess, I don't think I've ever read a word of Hemingway's writings, and was not familiar with Ms. McLain's work. But this book - oh, this book. It's written so beautifully ... such as you want to hold phrases on your mind's tongue to savor their sweetness. Devastatingly romantic. Not just regarding young love, but the passion of writing, of creating, of chasing muses. The naivete of believing anything can happen from merely wanting it so much. All of this speckled with wisps of bittersweet hindsight which makes it so accessible and relative to one's own experiences and life lessons.

It makes me, on numerous levels, long for the writer I always wanted to be but have never quite achieved.

While I realize it is largely fictional and not a true biography, it has sparked my interest in reading some of the works of Hemingway and other writers mentioned therein. Maybe my muse is being serenaded awake by those gone before me. Inspiration, much like the Lord, moves in mysterious ways.