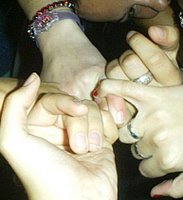 I see you've got your list out
Say your piece and get out
Yes I got the jist of it
But it's alright
Sorry that you feel that way
The only thing there is to say
Every silver lining’s got a
Touch of grey
I will get by
I will survive.

When the president of the college said this to us at freshman orientation, you could have heard a pin drop. As loud as a knitting needle.

There was talk afterwards that it seemed a pretty lousy thing to tell us this at orientation. Very discouraging. I agreed somewhat, but the guy had been at the school for about a hundred and twelve years, and I figured he knew what he was talking about. Not to mention, we were in the big league now. The bar was significantly raised. While we were all once the best artist at our school, we were now with every other best artist from every other school.

Still, we were sure we'd be one of the ones who would still be there at the end. We all were sure.

I remember one night about ten of us piled into my roommate's Escort, Keystone Cop fashion, and headed to the dance club for a little steam blowing. It was midterm time and we were all hyped up on a liquid diet of coffee, Mountain Dew and Jolt Cola. We were feeling particularly light of heart that evening, and were ready to have some fun.

"Touch of Grey" was popular that year, and as we sped down the road it came on the radio. The volume of our chatter was much louder than that of the box, but our ears picked it up and we all resounded, "OHHHHH YEAHHHH!" It hit the mood perfectly - my roommate turned it up and we all sang along. One of us said, "This is our song, guys! We'll all make it, forget what the Pres said about us!" We piled our hands together, playground pact style, and sang at the top of our lungs like it was a pledge.

We grasped each other's hands in affectionate high fives for the song's duration, grinning our fool heads off as we bellowed.

The President was right. At graduation time, our class was only half the size it started out. Of the four of us who roomed in the dorm together our first year, only two of us were walking the stage. I remember looking back on the night in that car, and it too delivered only about half of us in the pact to earning a degree.

Some of us ran out of money. Others ran out of drive. Others ran out of confidence. Art school is not the fun and games everyone thinks it is. Creating art on demand is tough. Draining. Exhausting. Those of us who did make it through were vastly different people from whence we started. Of the friends I've kept in touch with from college, many don't even work in the art field now. It's a rough line of work - demanding much and often giving monetarily little in return - and many of us put it aside, because the term "starving artist" is not funny when you live it.

When I hear "Touch of Grey" now though, like I did yesterday in the car, it simply takes me back to that night in the late eighties ~ when ten kids who were sure they had life by the package were absolutely, 100% sure that it would happen for us just as we dreamed it would.

It was a great place to be.

Ahhh...life is what happens to us when we are making plans for the future, eh? Reality sets in fast to young people, thus changing them from who they are to who they will become! Nice memory and glad you were one of those to "make" it!!

I was one of those people that wouldn't of been there....

It's funny. I'm just glad those days are behind me. I loved college, but I love being "all grown up", too.

College held many memories . . . some even good. :o) It was nice the way I crammed five years into a four year degree. :o)

Hey, do you live near me, since you know about that bar? I think its about 45 min away from me. You can email me and let me know, I think there is a link on my blog with my email....

Sounds like awesome memories. Believe it or not, I had similar first speech when I began community college. Though it held true, one could say that it is not surprising when community college consists mainly of older working adults - school, kids and a spouse probably don't mix well. :) Fortunately for me all I had was a bird. I made it through.

Sometimes I like the way a smell or a melody can conjure up a memory as if it were yesterday...and sometimes I don't. I always tell my students that it is not so much the education you receive in your field..but that you stayed committed to something so difficult to achieve...that is where the education truly lies.
Maggie May by Rod Stewart brings me back to my days as a young psychology student at the University of Miami.......hmmmm, now those are good memories. Thanks for such a thoughtful post.

The dean of my university delivered the same exact words at my orientation. There must have been a handbook passed out that year. We all thought it was pretty tacky too. It's kind of like talking about divorce rates at a wedding.

Touch of Grey always reminds me of the early years of college too. Weird how a song can totally bring you back.

Hmmm....so does that mean YOU work in the art field?

I had forgotten ALL ABOUT Jolt Cola...lol!

Don't you love how music can stir up memories? I think that's why I love it so much.

That song was the background to many of my own memories this post invited me to visit. Thank you :)

For all the fun I had in school, I don't think I'd like to relive it. There's a reason it's called the past. ;)

I wouldn't have been there either. School had something against me. But, I'd have shown up and cheered for ya.

As far as the song...I know what you mean. "Lean on Me" has a certain uh....heck, I don't know...but that song was played during a special moment and I always think of that moment when hearing the song.