How many opportunities does an average joe or josephine have in a lifetime to be a part of an actual honest-to-goodness historical moment?

I kind of had one today.

President Gerald Ford was laid to rest in his hometown of Grand Rapids today after a good week of memorializing the man with various stately honors. Gerald Ford served when I was just a kid, and admittedly my knowledge of that time in American history is not the best. I do know that his place in civil service way outreached his initial goals, and that he served at a time so shaky and disenchanted that I wouldn't take it on myself for anything. I know he was a man of unwaivering faith in a world of uncertainty, and that in and of itself I respect.

My bestest friend Naive just happened to be in GR today on an errand, and she thought enough to call me just as Ford's funeral was drawing to a close, because she wanted me to hear the jets fly over "in person", on the phone with her, as I watched the ceremony on television.

We chatted idly as we waited, I on my couch, and she standing in a parking lot hundreds of miles away from me. We discussed the health of our children and various things going on in our harried lives, and then she interrupted herself, squealing "Here they come!"

I could hear the distant roar of jet engines growing on the phone line, and my friend's voice grew in excitement with them. She described the first four F15s flying over her head, followed by the next and the next. Her awe was palpable, and I felt it as if I were there with her. As the screaming planes faded on the line, I watched them approach on my tv screen. They raced over the Gerald R. Ford Museum and burst apart in the Missing Man Formation. As I watched, I could hear Naive choking out, "OMG, I have chills!"

And I felt them too.

She told me she took a picture, and if it came out decent she'd send it to me. Later this afternoon this arrived in my email: 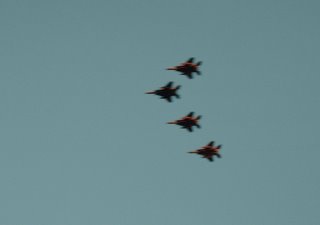 With the following note:

Here is the picture of one set of the F15's flying overhead. It was so nice talking with you and sharing that little snippet of history together. Miss you even more though.

It seems strange to find a ray of happiness in a solemn occasion such as this, but the fact that my dear friend thought to share this with me really turned my day around. I have been struggling with many burdens lately ... It's wonderful to be reminded that you matter to someone just because. My best friend brought me to where she was and gave me a cognitive historical souvenir all my own today. That's pretty cool.

Thank you, sis. And Rest in Peace, Mr. President.

I sat here reading this with tears in my eyes....I was touched by the closeness of two of my favorite 'girls' in the whole world.

I am so happy that the two of you connected a few years back and am doubly pleased that I have had the opporunity to get to know and love you just as I do Naive!

Beautiful post, thanks for sharing your part in a history making event. Very cool!!

That was a great post and I got chills just reading it. Very cool!

My thoughts are with you and your family...hugs dear clewy.

What a nice tribute!!! Isn't it magical to see a flyover? Even if not in person - that's a great shot!

awe nice story. Thinking how the little things in life mean so much.
I watched it on tv...just awesome, chills here too.

I'm glad you had that moment with your best friend.

That is so cool clew. It is nice having friends like that.

It's nice to have friends. I know many, many people, but have little to no friends. I think I work too hard at keeping them at a distance.

You are a fortunate young lady, Clew . . . and it was nice to share some history with a good friend.

I heard all about your visit by you know who...actually I heard about it before you even arrived. sounds like you folks all have a grand connection...that is awesome. Small world this blogosphere is...kinda like my smalltown....