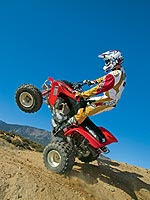 Last weekend we got together with some boating friends we hadn't seen since the fall. It was extra nice because they have a son Incrediboy's age and they became great buddies out on the lake last summer.
We had a cookout and enjoyed some beverages while the boys rode bikes, dug in the sandbox, and played with wild abandon. And at some point, Buddy's little quad runner came out for show and tell.
It was a cute little thing - green as a frog and just 4 year old-sized. Buddy strapped on his ridiculously disproportionate helmet and showed Incrediboy how he could ride it. Buddy spun it effortlessly around the property a few times, and Incrediboy looked on with great longing. Buddy's Dad asked Incrediboy if he'd like to try it (after asking us first), and his eyes lit up as he nodded vigorously.
After few quick lessons and quizzes on where the gas and the brake were, Incrediboy slowly rambled about, with Daddy running behind with the kill chord, just in case. Toward the end of the ride, I knew I was in trouble.
He was very careful. The quad had a governor on it to keep a speed cap ensured. Nothing dangerous or even scary happened. But as Daddy helped him off with his helmet, I saw it. I saw the look that daredevils and speed demons have. That glow in the cheeks and glint in the eyes that means my life and my garage will in time be stuffed with motocross bikes, go carts, quad runners and motorcycles. That birth of the hunger that will lead me to be on a first name basis with everyone who works in the ER.
I try to blame this on my Hub's blood in his veins. The man who only seems happy when he's going Mach 12 with his hair on fire. But as I dabbed Bactine on two little scraped knees tonight and blew cool air on them to soothe the sting, I remembered how my own knees were not without scabs for many summers (the ENTIRE summer), and how one year I even road rashed the entire back of my leg in a cannonball-speed-skating-down-a-driveway incident gone awry.
And I realized the poor child has no hope of escaping routine injury. Thrill seeking is infused in him - from both directions.
As of today, I have very few gray hairs - but I suspect that will be changing soon.

Been there far too many times......done the bit at the ER up until last year. Now it is time to start with the grand kids. Does it never end? I really can't get much grayer........I think I might have a few colored hairs amongst the silver! Stay safe Incrediboy, Mema loves you!!!

Hugs to all of you!

I've had these worries too, moreso lately since I started working at motorcycle/atv dealership when the husband started thinking DISCOUNTS for the boy!

Having no children myself, I am the best person to give advice...

Every boy should visit the emergency room at least once a summer while growing up.

Awwwww... I sometimes worry about My Boy because he's had so FEW injuries. Although it's not for lack of risk-taking. I think he must just have really good balance or something.