When I Was Younger, So Much Younger Than Today


Incrediboy has taken a shine to The Beatles. I couldn't be more proud.

Apparently his kindergarten teacher has one of those Kid's Bop CDs that has a chorus of children singing popular songs - and one of the songs on the CD is The Beatles' "Help!". We were talking about it on the way home one day and I subsequently pulled out my beloved Beatles anthologies in order to further expose and enrich his palate. You know, the ones labeled 1963-1966 and 1967-1970 - red and blue covers respectively, with their photos on a balcony taken in the same poses several years apart. 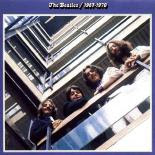 My older brother had these (and many other Beatles recordings) on vinyl when we were growing up. I absolutely loved them and I played them almost incessantly whenever he wasn't around, quickly sneaking them back into the alphabetically arranged peach crate in his room when he got dropped off from playing tennis or messing around doing whatever it was he did with his cool friends. One time I was so into the moment that he walked in the house and busted me listening to one of his most rare records. I thought he was going to kill me.

In my 20's, I persuaded a dealer at a record show to sell me the "red and blue" sets on CD for $20 total. Pretty good deal, and well worth eyelash batting at a creepy middle-aged balding guy with a ponytail (he wanted $40). And while it had been a few years since I dusted them off and popped them in the player, to this day I still love this collection more than almost anything else on my CD shelf.
We've been listening to them for days on our commute, and he's really digging it. How cool is that? 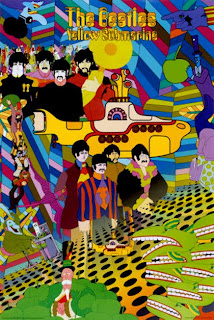 In the interest of further encouraging Incrediboy's newfound interest in the Liverpool lads, I dug out my old VHS copy of the 1967 classic animated feature, "Yellow Submarine". This bizarre yet hypnotically beautiful movie used to run on TV every so often when I was about his age, and I always loved the delicious deco-animation, ultra-crazy imagination, and hilarious wordplay put into it. Secretly, I've been anticipating the day I could share it with him and he could truly appreciate it as only a vibrant and uninhibited child's mind can.

Best of all, his favorite part is where Ringo picks up one of the holes in the Sea of Holes, squishes it down, places it in his trouser pocket, and quips, "I've got a hole in me pocket." That was always my favorite part, too.

The old Beatles tunes were great then and are great now. It seems like there is a resurgence in interest in their music.

I didn't have an older brother, but an older cousin (who also kept his albums in alphabetical and chronological order). He wasn't living at home and my aunt let me borrow the records...all the greatest of the 60's and 70's. He is sitting on a small fortune if he still has them.

"I've got a hole in me pocket." is my favorite part, too.

I can remember sitting in the mess decks on my ship listening to one of the guys little 45 record player (mono) playing over and over “I Wanna Hold Your Hand”. I always thought Ringo was the funniest and Paul was the most talented, but never figured out what George did. For some reason I never liked John who was arguably the most talented of the four. But what do I know? I liked country back then, too.

I'm pretty sure I have these CDs. Incrediboy has good taste. It's fun when you share your love for music with your kiddos. Ashleigh is a huge 80s music fan....I wonder why?!?!?!

You can't go wrong with the Beatles. Timeless.

Oh, and I was the cool older sister with row after row of alphabetized (and chronological) vinyl. Still have most of them.

Unfortunately, contrary to Ace's remark, we are not sitting on a small fortune. All my LPs and 45s are worthless moneywise. The only vinyls that might bring in any money are ones by the "big sellers" that still have the cellophane wrap on them.

The oldest LP I own is around 45 years old (!), and it and the crates of others have been moved and stored in my various residences over the years.

I just can't bear to part with them.

Be sure to turn Incrediboy on to Sgt. Pepper's Lonely Heart Club Band! It's a good one for kids.

I love the Beatles too. Encouraging the Babe to love them too.

I wqs amazed when my oldest granson borrowed my LP vinyls so he and the band he played in could really hear (their words, not mine) 'good music!' And the funny part is they said the sound was much truer than the new CD's and they weren't even the Beatles. Amazaing how I a 62 year old woman would actually having something in her possesion that would draw modern youth to borrow!

I've never seen "Yellow Submarine" but then I've never been a huge Beatles fan either. But I think it's awesome that Incrediboy is sharing one of you passions with you! :)

Chesneybaby has followed my love for country music. I let him stay up (way too late) for a little while to watch the ACM's last night and I couldn't believe he knew who Carrie Underwood, Sugarland, Miranda Lambert, Lady A, obviously Taylor and OF COURSE Kenny were at first site. And then he knew the names of the songs that were being performed too!
That's my boy!:)