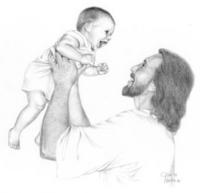 On “Miami Ink” last night, a couple came in the shop. The man wanted to get a tribute tattoo. The thing he had in mind was a pair of hands holding a tiny baby, donned with a halo, with the words “In God’s Hands”. As the tattoo was being done, the man explained that they had been expecting a baby girl and had learned she would be severely brain damaged. Faced with a choice of options, they decided to place the baby in God’s hands and if God allowed her to be born, than they would follow that path – and if she would leave this Earth, it would be by God’s decision only. The baby was born and they held her for two hours, praying over her. At her second hour, she died peacefully, and they submitted her sweet little soul into God’s hands, grateful for the time they’d been given with her.

Naturally, I was crying through the whole thing. This is a very sensitive subject for me.

Before the birth of my wonderful boy, we traveled a very difficult road. We lost 5 pregnancies. Those were the blackest days of my life. There is no possible way to describe to someone how devastating losing a baby is. How deeply you can love someone who isn’t even in the world yet, and how destroyed you can be - and for how long – after they are gone. And as horrible as it was to live through these times, others have had it worse.

My best friend lost her baby to what the medical profession politely calls a “cord accident”. The umbilical cord wrapped around the child’s neck, cutting off his bloodflow, and he died in utero. She was far enough along that they had to go through with delivering him before planning their baby’s funeral. They then went on to lose several more pregnancies to miscarriage before finally being blessed with their little boy.

To this day I have no idea how she managed to survive such a tragic course of events. I don’t think I could have done it.

My brother and sister-in-law had a little girl in 1988. Everything seemed perfect, until she was born and never started breathing. She died. An autopsy revealed that her lungs never developed properly – she didn’t have a chance. In the days before ultrasounds were as clear and precise as they are now, no one knew.

Logically, it doesn't seem that cutting ties to a being that never really got a chance to become anything doesn't seem like that big of a deal. But it is, in ways that defy logic and transcend sensibility.

I realize people just - don't know. So if there is anything I could tell anyone who knows someone suffering such a loss, it is this: Be understanding. Be patient. Be careful what you say. Understand that though you never saw or held this child, that he/she was very real to their parents. Recognize and acknowledge the child and the loss – it will let the parents know you care and you remember. Understand that if they cry when you talk to them about it, it’s not because you hurt them. You are helping them grieve. Don’t think that the thoughts of the baby are bad memories – the bond, love and dreams they had for their child were good and full of love. Don’t stay away – it only makes grieving parents feel forgotten. If there are times they wish to be left alone or move on to other subjects, they’ll let you know, but to let them know you remember and care is a powerful salve for them – not to mention many others may have the same idea and they are subsequently left with no one around them who says they care. Don’t say anything like “You can have another baby”, or “It was nature’s way of telling you something was wrong with the baby”. While this may be true, babies are not interchangeable and another baby will not be the same – and even if something were wrong, that baby was perfect to its parents. To say otherwise can feel like a slap in the face for the heartbroken. Be understanding if they don’t want to be around other expectant parents for a while. It’s not that they aren’t happy for them – but it’s a painful thing to witness others being blessed with an event that was taken away from you. Naturally there will be feelings of jealousy and emptiness, and it’s not selfish of them at all.

Most of all, be understanding that this is not something anyone can get over in a few weeks or months. Or even years. Allow them to heal at their own pace, and be unconditionally supportive of them. That’s what friends do.

Each path of mourning is as individual as the ones affected. I remember when we lost our first child, the Hub told me he found his comfort in thinking that his Dad, who had died in the early eighties, is with our baby, his grandchild, in Heaven - and they are both in our Lord's loving presence as they await our joining them. Though it did not make my heart nor my arms ache any less, I liked that thought too. This heartbroken couple was using a memorial placed on the father’s skin to aid in their healing over the loss of their baby girl. Would it be the method I’d choose? No, but it wasn’t about me. We each grieve and rebuild in our own ways and in our own time. I pray to God that this will help them along their path.

Clew, thanks for never forgetting Owen. Stillbirth is such a "silent death", it's nice to know people recognize your heart ache and acknowledge the life that was here so breifly.
Love you, Mims

First off, I'm so terribly sorry for all of your losses. While I've been blessed to have not encountered that pain - I do know two people who have. I honestly could not imagine the pain and devastation that one must feel when losing their child. I just can't. And although I tend to be an eternal optomist - and try to believe that everything happens "for a reason" - I definitely have a difficult time rationalizing that particular circumstance. I do believe that those innocent souls do go to heaven and that they do watch down. I'd like to think that there is some semblence of comfort in that. And I have to tell you - I'm very sorry if people have said things that may have appeared insensitive; sometimes people just don't understand that losing a life that hasn't even "started" yet (for all intents and purposes) is maybe even more devastating than losing a one that has. If nothing else - it's definitely paralell.

Losing a child would be the most horrible thing I can imagine. I'm so sorry you had to go through that.

It's so hard to know what to say in the face of such grief and such mourning.

I really like the picture you have along with this entry. That's how I always imagined Jesus would be-- playing with the kids rather than just making them sit quietly and listen. :-)

oooh. great point bainwen. It is a beautiful shot and how ideally it would truly be. :)

Why bad things exist is the key problem I have always struggled with. You just don't know.

By the way, thanks for the comment on my blog. I think I know whom the AC is.

Wow. I had a very close friend of mine lose a child to miscarriage and while I haven't personally lost a child in this manner, I could see the devistation. This is a wonderful post that may help other people understand the devistation.

Thanks for visiting my blog, I will be back again.

I'm pondering taking my blog private, thanks to certain Asswipish comments. Drop me a line, will you? I'll zip ya an invite. Toss my IM handle in front of @yahoo.com and that'll get to me. :-)

I cannot imagine the heartache of losing a child. My husband and his first wife (she was killed in a car accident 10 years ago), lost a baby boy and had to go through the delivery, knowing he was already gone.

I put something for you over on my blog...because I thought it expressed better what I cannot find words for.

Thank you for sharing this. It's something that those of us who've never been through it could not possibly understand, and it's so hard to know what to do when someone you love goes through it. You've opened a window of understanding, and perhaps helped me understand a friendship that was close before I had my child, but is no more.

I'm so sorry for your loss. My mom lost a baby when I was 10. She didn't have the heart to try again. I know I'll be with my brother or sister in heaven someday.

"Don’t stay away – it only makes grieving parents feel forgotten. If there are times they wish to be left alone or move on to other subjects, they’ll let you know, but to let them know you remember and care is a powerful salve for them – not to mention many others may have the same idea and they are subsequently left with no one around them who says they care." -- This is so true and unbelievably common! When my son died I lost almost all of my friends. People didn't know what to say so they said nothing at all. Friends afraid of saying the wrong thing just avoid the "problem" instead. For someone who just lost a child, it really adds insult to injury to lose all their friends as well. If you don't know what to say, say just that: "I'm so sorry for your loss. I can't possibly understand what you are going through and I don't know what to say. I care about you deeply and would like to be here for you."

Also, many grieving parents don't have the energy to reach out to others. Don't just say "if you need anything I'll be here". Instead, be an active part of that parent's life. Show them you still care.

"Don’t say anything like “You can have another baby”, or “It was nature’s way of telling you something was wrong with the baby”." -- I would also add: Don't say "Your child is better off in Heaven" or "God does everything for a reason". These statements are more hurtful than you can imagine. For someone who has faith, these statements make one question their own faith. Afterall, why would a good God take an innocent child? I was never atheist until after I watched my young son die a very long drawn-out painful death by cancer.