Listen ... The Past is Whispering 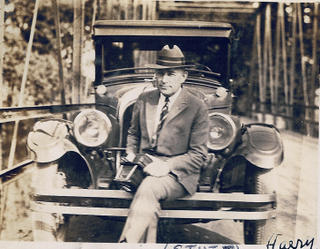 This is a picture of my great-great uncle. I do not know the date this photo was taken but he died in 1930 so it’s more than likely in the 1920’s. Though he was not as well known as say, Henry Ford, he was a great automotive pioneer of the day. His cars were high-end, mostly driven by movie stars and other well-to-dos, and were raced in the Indy 500. He also designed motorcycles, fire trucks, and upon his death was hard at work on an innovative design of airplane engine. His accomplishments were remarkable to say the least, and I always admired him for rising above his farming roots to chase his dreams. I have often wondered if he is the mysterious link in my gene chain which affords me the guts and hard headedness to step out of the stream, from attending a college different from the one my entire family had attended to my occasional, seemingly off the cuff, snap decisions pivotal to the directions of my life.

I love the nonchalant-ness of this photo. The casually crossed leg, the quick glance up at the camera. While most portraits of the day were stiff and posed, this seems to merely be a frozen moment. Perhaps he and the photographer were having an impromptu discussion about how the heck this new fangled contraption in his hands is supposed to work.

Old photographs are fascinating windows to me – like looking upon the faces of ghosts – long after the subjects have left the bonds of Earth, their earthly images remain on pieces of paper, canvas, metal.

I have always loved the water. From the time I was young I longed to be near it – fresh or salt, it didn’t matter, so long as I could visit its shore, swim in it, set sail upon it. My folks weren’t sure where I got this, as no one my family had a particular interest in water and boating. But I loved it. Eventually I married a boater and we spend our fair weather weekends happily on the local water fares and when traveling often frequent some shore or another.

Years later, in the process of researching my family history, I read in an autobiography published by a preservation club that Uncle H had a huge passion for water and boating. This fact had been lost somewhere in the annals of my oral family history, but obviously the strand quietly carried on to an albeit distant branch of the tree. I was thrilled to share this link with him, and it brought our relationship closer to home for me.

Among my other treasures linking me to my past is my Grandmother’s cookbook. This is my other Grandmother, not the one with the famous beef and noodles. This Grandma was very different than the other. She was tall and beautiful and truth be told, traces of evidence point to her being a wild child in her day. She married late (by the standards of those days) and was never known for her cooking talents. That’s not to say it was for lack of trying.

She painstakingly collected and tested recipes most of her life after marriage. Mom quips that it’s a wonder she and her brother lived to adulthood.

This tired and weathered book was published around the turn of the century and I assume was given to her, or perhaps she purchased it for herself in preparation for domestic life. Its recipes call for ingredients that spoiled and finicky moderners wouldn’t think of using. Bones. Brains. Suet. In nearly any blank section of page is scribbled in her royal handwriting, some recipe or another handed down by her mother, sisters, a neighbor or friend. The passage of time and wear has nearly faded some of them into unrecognizable hatchmarks. Clippings of recipes and hints torn from women’s magazines of the day, many accented with an unnaturally ecstatic cartoon housewife in heels and pearls, stick out riotously from the covers. I straighten and tuck them back in periodically but they seem to wander their way back out again when I’m not looking. Maybe these are the recipes she never got around to trying. Maybe she is telling me to make the time to do the things I want to do. To not let too much time slip away. "If done right," she whispers, "this could be good."

yet another interesting post! i love reading your blog theres always something that really grips me

I only found my blood family eight months before my aunt died. She let me have two of her old cookbooks. Even though I had no history with her, I'll treasure those cookbooks. I envy people with family his/herstories. Just think of all the material you have to use! Rich post.

(My only consolation is this: Without a place to stand, I am everywhere.)

wow. well written. I love it when people describe photographs or artwork!