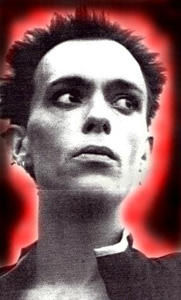 That was the first thing he ever said to me. We were in that dark, dirty metal bar that we both frequented on AC/DC Cult Night. We got to talking because that’s just what you do when you’re young and social.

I really didn’t know who he was. I’d heard his name but had no idea who he was just to look at him. He was kind of famous, on a local level. He’d cut a CD that was selling well, and he played a lot of local clubs. To be honest I’d only heard one of his songs, and that was only recently, so I just treated him as any other person without the least hint of being star struck. Maybe that’s why he liked hanging out with me.

He was kind of scary looking. Spiky black hair, milky complexion, skeletal frame. Tall, with googly eyes. He came over one time and half scared the crap out of my prissy roommate. I still laugh about that. He had substance abuse problems and was easily a two-packer-a-day, maybe more. But he was a good person.

We talked a lot, both face to face and on the phone ~ deep into the night, when darkness and quiet and the lack of looking someone else in the eyes makes you feel less guarded with your feelings. We got to be very close friends, and he confided deepest secrets in me. Horrible things about his past. The things that pushed him into the quicksand of poison in which he secretly floundered, trying to overcome but having no success. I listened, and I cared. He told me I was the only one who seemed to, and he loved me for it. He was a brother to me. I was happy to be there for him and even now have not breeched his confidence.

He met this girl one time, and he completely fell in love with her. She was very nice and exotically beautiful. I could understand his attraction. He got off drugs and totally cleaned up his life with the strength her love gave him.

He told me she was his savior.

They got married and I was so happy for him. For both of them. And just like that he disappeared.

A few years later, I saw his face on the news. I wasn’t sure I heard right at first. After his wife had left him, he put a gun in his mouth and blew his brains out.

DAMN..... exceedingly powerful. The end was unexpected--but I guess that is what life is about.

ohmigod! sorry to hear about that hin :)