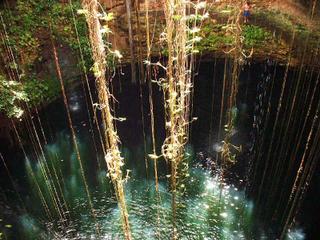 The cool clean water enveloped me, and every cell in my body let out a nearly audible sigh. It was just so incredibly hot up above.

Moments before I had descended the stone staircase from the ground above to enter the naturally formed cathedral. The walls were draped in veils of ivy and moss, and long dreadlocky vines poured down from the skylight a hundred feet above, disappearing below the surface. Waterfalls wept from the rock, trickled and splattered on all faces. Small, inky black catfish swam in lazy circular samba.

Imagine, if you will, what velvet may feel like if it were liquid. Picture in your mind the deepest, richest color between cornflower and jade. You will then get an idea of the water there. They say the bottom has never been detected. It’s just as well, probably, as the sinkhole was once used for human sacrifices. 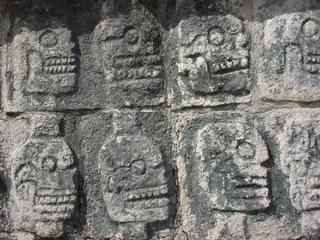 We’d spent the day exploring Chichen Itza, the long abandoned mecca of the Mayan empire. We’d stood in the center of the acoustically perfected ball field. We’d seen the observatory from where ancient eyes and minds contemplated the heavens. We paid quiet homage beside temples adorned with the serpent god Kukulcan and a sea of stone skulls. Skulls representing the lives of those sacrificed to the gods. We had climbed to the top of the great sun pyramid to survey the site from above. Ninety-one steps on each side of the great pyramid. Times four sides, plus the top platform made for 365 steps. The same number of days in a calendar year.

We’d spent an unparalleled day communing with a long-gone race as brilliant as they were brutal.

I climbed from the sinkhole feeling baptized.

Perhaps the wisdom of the Mayans had somehow penetrated my fibers. Perhaps their souls had somehow fused with mine. All I can tell you is that when I left Chichen Itza, I was changed.

Once again your words have painted a most beautiful picture and transported my vision to this place! Thank you, Clew!

I can't remember, but do you write a lot of poetry too? if not--you should. you're a poet. your words are magically soothing

That sounds even better than when I was there!

It is a mystical magical place, I wish that they could somehow "limit" the number of people that visit on a daily basis because it truly is a place that needs to be contemplated without children (and adults) running around screaming, etc.

As I was reading your post, I was able to visualize every word. Very well written!

What a vividly beautiful post. You are an amazing writer. Love the picture of the sinkhole.