Dare I Open My Eyes 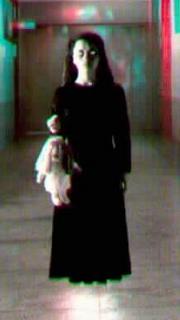 If there’s anything can be said about me, it’s that I love ghost stories.

One October when I was in college, my boyfriend got tickets for a haunted tour of our city. The tour, taken by bus, visited spots around the downtown area, known or considered to be haunted. We would all get out in order to more closely feel the location, as the guide would fill us in on the corresponding lore of the site. We visited well-known places, such as the city’s oldest and largest graveyard, the downtown hospital where a ghostly nurse had been reported several times walking through the courtyard at night, and the old abandoned state penitentiary (now gone to make room for the NHL expansion arena), where many a rotten-souled offender had met his end.

We also stopped at lesser-known places. Small shops, historical buildings and residences. The one I remember most vividly was a Victorian home just east of downtown. I could have walked there from where I was living at the time. It had since been converted to an attorney’s office, but many years ago as a residence, it sat on the market for a long time. It was reportedly haunted, and people were more superstitious and easily scared away from such rumored places. Eventually a man, finding himself to be clever as he was unphased by such stories, finally bought it for a fraction of its worth. He moved in.

Not long after settling, he awoke from a deep sleep one night, feeling all was not well. He rolled over in bed and looked up at the ceiling. Suspended above him was an illuminated disembodied head. It faced him, wide black eyes fixated upon his, hair and ethereal gauzy strips of clothing floating wreathlike as if in water. The mouth was frozen in a strained and panicked silent scream.

The man was so terrified he couldn’t move. The two stared at each other until dawn, when the ghost face slowly faded away with the light of morning. Once he could manage to move, he got out and never returned to the house outside of daylight hours.

To this day, there are times when I will wake up at night feeling as though I am being watched. I will take a moment to brace myself for what I might see hovering above me if I open my eyes.

You are probably being watched at night by one most beautiful doggie, willing you awake so he can go outside and do his business.

Nice! Now I'm scared as hell and I'm going to be seeing things all night and thinking I'm being watched by a poltergeist.

That is TOO too creepy. My roomie had something similar that happened to her in a theatre/hotel one night. Probably a story I won't tell, because I really can't do it justice. S-h-i-v-e-r.

Great story!!!!!!!!!!!!
I don't mind that I am awful at telling them, because I can live vicariously between you and Cheryl! :)

this is frightening. I want to go to a haunted house this halloween now.

Very cool ghost story! I love a good one now and then.

Just pull your covers over your head. Everyone knows that nothing can penetrate the "blankie shield."