Who else LOVES horror flicks? 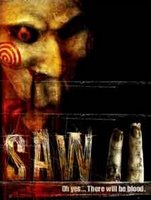 This weekend, after Incrediboy was in bed, we watched “Saw II”.

“Saw” is one of our favorite movies so we’d been cautiously looking forward to the sequel, hoping that it wouldn’t be ruined.

I have always been intrigued with the goings-on in the psyche and thought processes of serial killers and assorted madmen. Many are underrated geniuses – albeit their mental energy is used in most detrimentally unfortunate fashions, their processes are so fascinating. For those who have not seen these movies, the first “Saw” is a setup of two men placed in chains in an undisclosed lavatory. They are provided with a handful of puzzle piece clues and items which could possibly aid in their escape, including a hacksaw. The saw is not strong enough to cut through the chains, but IS strong enough to cut through bone … If one does not escape and kill the other, they will both subsequently die at the hands of the mastermind behind the setup, who is watching the entire time. Somewhere, watching.

In the second one, a group of people have been placed in a locked and sealed building. They are all linked by an undisclosed connection, and are all supposedly provided with the proper clues to find their way out. But the house is boobytrapped at every turn, and is meanwhile being slowly flooded with a fatal nerve gas, and the clock is running. These trapped rats must endure the gruesome puzzles, trials and tests as they simultaneously hunt for antidotes.

Both movies are brilliantly written, with twists and clues that are only seen in hindsight.

I’m not a sicko, I swear. I am just drawn to the strange thought patterns of psychopaths, and psychological horror is my favorite kind. The thing is, I don’t know what bothers me more – the movie itself, or the fact that someone actually came up with these things. Perhaps this is the writer’s behavior filter. To channel bad thoughts into a story rather than an act. I can’t imagine a normal, well-adjusted person even coming up with this stuff, though - even for the sake of storytelling - it's just - scary, to even dream it up. Makes you wonder about everyone you even run across.

These kinds of movies have me thinking about them for days afterwards.

It’s a great movie that can do that to you.

I haven't seen either of them yet, but now we're going to have to rent them. We've been renting quite a few movies lately, but not those. Thanks for the peek inside of them! On my list now!

OMG! I'm going to have nightmares for a week just from reading your post! ;) I've got an extrememly overactive imagination when it comes to scary stuff.

I honestly can't watch this stuff, much for the reason you wrote at the end of your post 'who thinks this stuff up?' That, I think, is what scares the hell out of me most...that someone actually can think that way.

You can keep those kinds of movies... I hate them. I do like psychological thrillers ie. Jagged Edge, Body Heat, Basic Instinct... not quite as graphic and somehow they don't feel as "evil."

Not this time said...

I wonder that myself - "Who is even able to come up with this stuff?!?!" It's crazy. Although, I think my boyfriend might be capable of such atrocities.

I don't like these kind of movies either....they seem to imply that there are more lunatics out there than I want to think about!!

Oh gosh! I don't watch movies like that. If I had been there at some point I would have probably said, "Pretend I'm incrediboy and hold me I'm scared!!!" I want my mommy! LOL

After working 12 hours overtime Saturday, I came home hungry. I hadn't had a lunch the entire 12 hours. I was eating everything I could get my hands on. While stuffing my face, I watched The Discovery Channel. Some story about a real life haunting. It was a demonic haunting. I had to eventually turn the channel.

Sorry, girlfriend. I'm going to have to pass! Not that I don't trust your taste, but I'm a big chicken! I HATE these kinds of movies! In college a group of us went to see a scary movie around Halloween and I was mad at them for days! I guess my thing is that there are enough crazy people out there the way it is. Why create new ones intentionally..and give the already existing psychos any more ideas?! AAARRRGGGHHHHHH!!!!!!!!!!!!!!!!!!!

you think "saw" was scary? heck, i have scarier home movies.

Dale and I watched the first one. I didn't even know they made a sequel. The first one was very disturbing. I didn't like the ending, but at least two-thirds of the movie kept my attention very, very well. I am now curious to watch the second.

In reading this particular post before heading off to bed, I can guarantee you that I will be having nightmares tonight of dismembered body parts. Thanks clew. :-P

Well, it's not SCARY scary as it is DISTURBING scary. Though considering the source, I'm not surprised if that's the case with you, AC. ;)

It's not everyone's cup of tea, for sure.

You bunch of sissy's, Both Movies were great. You must see these to know your Alive, and appreciate LIFE!

The darkness that lives within has to have an outlet.

A psychological thriller is better than a horror flick any day, so don't think you'll talk me into watching any while your here. ;)

Naw, I love those movies too, although, I'm more into the supernatural thrillers. It's morbid curiousity, everyone has it to some degree or another.

I'm with Lori. I think these movies are tasteless. I don't mind blood. I like war movies. I hate these.

Sorry bigwhitehat,
I gotta disagree.. I LOVE these movies... why? because it's the true dark psychotic side that we all possess, but yet suppress. And, living in nyc for 6 yrs now--I gotta admit, I know that these things are believable and could easily happen

I'm kinda squeemish --ok VERY squeemish-- so I'll probably never watch them. (I can't even watch ER.)But a lot of people have raved about them, so I have been tempted.