Well my friends, I’m back from my long weekend with Naïve-No-More. We had a fantastic time, and while it’s nice to be back in the arms of my loving men, I miss her terribly. It seems like we should still be able to laugh, smart off and just idly chat together throughout the day. I’m spoiled now and I miss my friend.

I know you’re all waiting with bated breath for juicy details, and I have many heart-thrilling thoughts and observances to share! 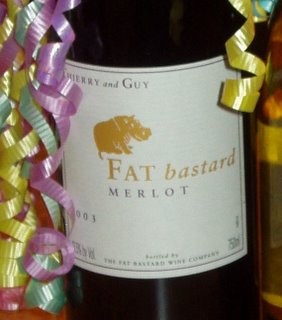 I went bearing wine for their bar … I took some that I found with her name on the label which I thought was fun – and then another kind for sheer laughs … after I was on my way the thought occurred to me that her husband might think I was trying to say something about HIM with this OTHER label - Luckily we’re friends too and he took no offense. ;)

BTW, this wine's pretty good. If you can find it, pick up a bottle.

After I arrived we hung out a bit, jabbering like tweens, jittery from adrenaline – 18 months is a long time for inseparable friends to go without seeing each other – before heading off to our scrapping event. We first went to her local crack dealer (e.g. the scrapbook store) where we bought some new fun tools, and then as Naïve mentioned in her memoirs, we stopped by Target for some items, where we caused all kinds of ruckus. She’ll tell you WE knocked over the display of cups, but I was nowhere near it. Well, I was near it, but I didn’t do it.

The scrapbook gathering wasn’t as productive as it could have been, but that’s okay - We were distracted by each other’s company mostly, which is a good excuse. We made a big mess and the girls all had fun teasing me about my accent (Huh? I don’t have an accent!). We stayed through Saturday and then took it to her place for the rest of the weekend.

Incidentally, on the way home we actually saw a guy in a car PICK his NOSE, examine his find, and then EAT IT! Can you believe that?

Saturday night we ordered our Chinese feast of General Tso Chicken, Moo Goo Beef, and of course, the king of all Chinese food as the main course - Crab Rangoon. Mmm, deep fried cheesy goodness. Back to the diet today, but we really enjoyed ourselves Saturday and refused to feel guilt or remorse about it either!

To compliment the spread I enjoyed some of Naïve and Mr. Naïve’s incredibly incredible chai beer. Look at that lovely amber color! And it tastes as sublime as it looks. Holy crap it was tasty. If I lived anywhere near them I’d be a complete booze hag on their brews. I learned that beer and pop are made pretty much the same way but you simply halt the fermenting process sooner when making pop so that it doesn’t generate alcohol. Additionally, I learned that ginger ale gets its flavor from ginger. I know that’s painfully obvious, but somehow the thought had not occurred to me.

The remainder of the while we spread our scrapping wares all over downstairs (okay, it was mostly me and my stuff taking over the place – she’s a much more tidy scrapper than I) and we continued to create and visit. Naïve turned me on to chalking, for which I’m still mad at her. I love it, it’s much easier and less messy than I thought, but now I have to go buy a bunch more stuff and will forevermore be unhappy with previous layouts. LOL. Thanks a LOT!

Besides eating and scrapping and discussing beverage chemistry, we watched a few movies and played Balderdash with the family. Allow me to add that I kicked their butts. Naive congratulated me with this official salute. How rude!

We were going to get on line and post together just to be exceptionally annoying for all of you, but her internet service was down. Dang. We were thinking of you guys though, honest!

Monday came too quickly. We got up and had breakfast, drank 4 or 5 pots of coffee and blabbed some more, and then made a crank call to Nelly’s work. I was going to call and tell her I was with the Vin Diesel Gratuitous Digital Image Monitoring Bureau and that we were going to have to fine her for excessive image exploitation. The joke was on us though, as Nelly was home with a sick kid! Nelly’s office mate emailed our number to her though and she called us back. It was fun to chat with her for a few minutes! She definitely seems like she's “one of us” (scary thought).

I progressively changed my departure plan from ten to eleven. Then twelve. At one, after playing into several of Naïve’s stall tactics, I finally forced myself to leave. We had a wonderfully relaxing weekend of girl time – it’s a joy to have a friend who you can be a complete manic a$$ with as well as enjoy comfortable sporadic silence while trenched in creative indulgence.

I think I even made it into the double-digit miles on my trip home before I actually cried.

Miss not being able to see you or talk with you during your visit! Glad you had a good time!

I just can't seem to get into a groove this week. I keep feeling like I should just be able to chat with you without getting online. It's not fair that you live so far away.

I had a wonderful time with you and we have to make good on our promise to not let 18 months slide by again.

I still think you had something to do with the cup display falling over! ;)

Awwww...what a sweet post! I'm sooooo glad you guys took the time to call me! Loved, loved, loved talking to you guys! I have such an inside feeling about you guys, it's weird, I can't explain it, I just know we have to meet. I thought about you two all weekend. One day we'll hang out!

Sounds like you girls had a blast! :) It's too bad so much time goes by between visits -but in some ways, you cherish them that much more because of it. ;)

You girls had way too much fun, I think! I'm so glad you were able to get together..makes me miss my closest gf though...sniff, sniff.

sounds like y'all had a great time. Nothing's better than being with some old/new friends. . . i just gotta plan my roadtrips now...

hope all is well with you.

We went to the Dr. Pepper museum. When there I met and old CEO of the company. He explained to me how Ginger Ale is made. Did you know it takes about 3 years to make a batch?

Okay, scrapbookind doesn't 'do it' for me; but it still sounds like you had a great time. Isn't it great having a friend that you can not see for months, but then get together and it's like no time has passed?

And ewwwww re: the guy pickig his nose.

And double ewwwww that you went from telling us that, to telling us about your meal. LOL

Wow--sounds like a GREAT time!! Fat Bastard is a good wine. And not to make this all about me, but it reminded me of something funny--my ex-husband gave me a bottle of wine called "Wrongo Dongo" for Christmas. Is there not something ironic about that?

Were those crab rangoons I saw in the pictures?

I wish we could have come up to meet you guys! Someone, (I won't mention any names) couldn't break free to join you! I am so glad you had fun! I am curious to know, if I had another scrap night at my house, would you be interested in joining us? Let me know, we are going to pick a weekend soon!

Glad to hear you had a good trip. I think you had something to do with that display falling too. lol

I'm so glad (and so envious) you had such a good time! Being as close as sisters with someone is a special gift. I'm so glad you found each other & keep it alive.

sounds like you had an amazing time. makes me miss my friends back home :(

Good reads, Clew! And I really would like to try that beer! When are you guys coming to Colorado?!

Chai beer? Chai is the Indian word for tea, and I hadn't a clue such a thing existed. Sounds interesting, though. Pass one over, will ya? ;)

There should be blog get togethers, that would be very cool. Sounds like a business idea.

THANK YOU KODI! I've been saying that all along! A safe place for bloggin buddies to meet!!!! FAB IDEA!

So fun!!! I imagine me and my best friends will have the same when I get back home this summer! Complete with chinese & scrapping!