Lyric of the Day is being bypassed this post … I don’t want to bore anyone, but I’m a science geek, and I have a bee in my bonnet about something. 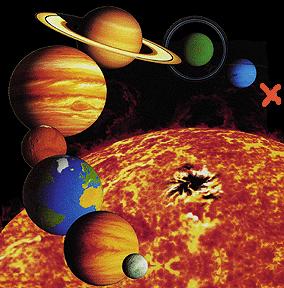 So I guess we only have 8 planets in our solar system now. Poor Pluto has been stripped of her planetary status. Mercury through Neptune are still considered “worlds” but poor Pluto is now declared a “dwarf planet”, which under the new definitions are not planets at all, but merely round shaped objects that just kind of hang around the vicinity of our sun.

Honestly, is this really necessary?

Pluto was named a planet in 1930. Nearly everyone who is alive today has been engrained with the Big Nine. Mercury Venus Earth Mars Saturn Uranus Neptune Pluto. Many of us even learned a cute little phrase to remember them. “My Very Eccentric Mother Just Served Us Nine Pizzas” – or something similar to that, depending on where you grew up. It worked well. Everyone was fine with it. Is it really necessary to derail everyone’s ingrained knowledge of our planetary system?

Okay, so Pluto's smaller than they once thought. So what? Plus I did hear that there was discussion of Pluto and Charon both being deemed planets due to the fact that it’s since been discovered they actually orbit around each other as they orbit the sun. But then it seems they decided to just kick them both out. If the size thing may have been looked over in and of itself, I guess maybe the dual-orbit thing was poor Pluto's nail in the coffin.

Listen, I can dig there being new guidelines. Space studies have come a long way since 1930. But couldn't we grandfather Pluto in? We all already know Pluto. We all love Pluto. Isn't this kind of like saying, "Well, Hawaii, we've rethought things and have decided that since you are just a bunch of bits of land in the middle of the ocean and the rest of us are attached to something, you aren't really a state. We're going to demote you to a territory."

Okay, maybe not the same. But you get my point.

I’d like to know who’s going to pay for all this. I bet it’s not this guy! Caltech’s Mike Brown, one of these poofy-pantalooned geniuses invited to participate in this decision, said about it all, "The public is not going to be excited by the fact that Pluto has been kicked out, but it's the right thing to do."

The 'right thing to do'? What the crap?

So size does matter?

Yeah too bad for Pluto. Now what do we say? My eccentic mother just served us nothing. Awe
Well I've made it back to the boards. Hope your doing well. I have alot of catching up to do.

I could not have expressed it better.....I agree with you and your assesment of the whole shitty mess!

My buddy....you're some kind of science geek Clew, I'm impressed.

Buds with a genuis...I feel like all important and shit now.

"You know my buddy Clew/ Yeah...she's a science geek and a genius. Yep, I know her"

I agree. One thing you forgot to add is that the astronomers that voted for this numbered only 5% of the total amt. of astronomers in the world. Very few participated in this vote.

"Astronomical Anarchy", I like that!! Ya know what would make a good post also??? Just an idea...what other things have you learned that as being the truth and the way of the world and was changed????? Like...believing that you can catch a cold by not dressing warm enough????

you can't fight change. as our knowledge grows so does our understanding. i mean would we still want a map of the world that depicted it flat?

look clew i do still exist even if i just occasionally lurk.

Yeah I heard about this... Its so dumb. Now they are gonna have to pay to change science books and everything. Way to confuse my 7 year old daughter who is just starting to learn about planets...
yesh...

My new headline is "Pluto has been deleted, please restart your solar system."

Poor old Pluto. I wish they'd gone with the other plan instead, the one where they'd have kept Pluto and made Charon and "Xena" members of the Planet Club.

Of course we'd still have to come up with new mnemonics then.

I got a report that some people are having trouble commenting, so this is just a test ...

I was saying the same thing on Friday when I heard the news. Just because some scientist believes his IQ level and decides Pluto isn't deserving enough to be a planet? Come on now...! Everything's going to be all messed up now as you mentioned...history books, reference materials, pre-programmed telescopes that come all programmed to find the planets! Unbelievable.

Pluto is a fairly large piece of dirt with an irregular orbit. Grandfathering things in doesn't really work in science... it either is the thing, or it is not.

To put this best into perspective, I'll turn the tables.

Do better. Come up with a definition for planet that doesn't involve some phrase like "except Pluto," that includes Pluto but doesn't add a bunch of planets that would require us to memorize two pages worth of mnemonic device.

YES. i just found otu today about Pluto. Doesn't that make us re-consider everythign else about the world as we once knew it?

Where ya at buddy?

I found hearing about Pluto losing its planet status to be a downer. Some parents are paying $50,000 to make their children taller and scientists are "x-ing" Pluto off as a planet because of size.

What does this say to women like myself who are 5'3?

I have Pluto complex now. I want Pluto back as a planet.