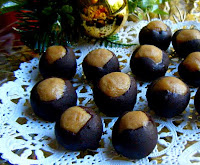 Sometimes, it seems like the eating gods are against you. Other times, things just work out.

My friend and coworker gave me a nice batch of buckeyes that his wife made for Christmas. For those who are unfamiliar, buckeyes are a somewhat regional treat, made of a peanut butter and confectioner's sugar mixture rolled into balls and about 3/4 submerged in chocolate coating. They are FABULOUS. Easily my favorite treat ever. I could eat about a thousand of them, which is the problem.

I took them home and placed the bag on the kitchen counter. Later on I got that certain sense possessed by mothers that something mischievous was going on.

To my chagrin, Most Beautiful Dog had snagged the bag of treats from the counter, had torn it open and helped himself. He only actually ate a few before I busted him, but left a toothmark or two in each remaining one. This may not bother some dog moms - and believe me, I love buckeyes so much I almost considered looking over them. But knowing his penchant for butt-licking I decided otherwise.

That's a damn shame, having to throw those luscious jewels away. But I'm sure MBDog had my best interests in mind and was merely trying to help me stick to my healthy eating plan.

*Cries with you* LOL My hubby & I LOVE Buckeyes, they are definitely one of our fave treats, too! Guess MBDog shares our good taste, huh? Cute story but sorry you lost them!! :/

And did MBDog give you that "Sorry, I'm guilty" look?

Faced with the same dilemma, I probably would have just blown on the bon bons, maybe given them a quick rinse in the sink, and then stuck them in the freezer for a half hour so the cold temperature could perform its kill-bacteria function. The way boiling does - just a different method.

Meanwhile, I hope your friend gives you another bag of buckeyes. Tis the season for treats!

I got my first taste of Buckeyes, as you know, and, butt licking or not, they would not have gone to waste.