The Hub ran out to the outbuilding for something last night, and came back to call me out into the back yard to see something. He had the excited look of a child on his face, so I knew it must be something pretty cool.

There were thunderstorm warnings out, but the sky was mostly clear. The stars twinkled brightly and the near-full moon bathed the countryside with a haunting blue glow. And there, to the right of the moon - there it was. 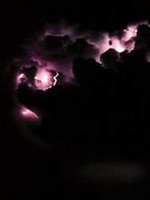 An enormous lone thunderhead towered high above the earth. It churned and lurched lazily. And most remarkable of all, it flickered. It flickered and flashed, illuminated from within by its own electricity and casting out delicate spindly fronds of lightning. Gentle, pulsating illuminations, punctuated with rudely bright blasts of light. I’ve never seen such busy electrical activity within one cloud in my life.

We watched the light show for a long time.

As we watched, the thunderhead slowly approached the moon. And yet another sight I’d never seen took place in front of my eyes. As the cloud passed in front of the moon, from around the edges spilled moonbeams. As defined and distinctive as sunbeams, bright columns of moonlight burst around the confines of the cloud’s edges as its distinct shadow slid through the very air above.

To add to the drama, there was the silence. Silence of the air, silence of the nocturnal wildlife, and silence of the storm. No cracks, no roll of thunder. Not a sound. It was absolutely, overwhelmingly majestic.

My only thought was,
“Be still, and know that I am God.”

WOW! Wish I could have been there to see it with you!

I'm sure the photograph doesn't even come close to the vision in real life. It almost looks like fingers trying to wrap around the moon and snuff out it's light.

Great shot. Glad you got to witness that.

Footnote, Naive (and everyone) - I didn't take this picture, but it was the closest representation that I could google up ;).

Still doesn't do it justice. I wish you all could have seen it.

How cool. I love to stand outside in a thunderstorm!

Great picture, Wonderful colors You should frame that one. And btw thanks for checking in on me. I have been enjoying the outdoors, spring weather. Have slacked on my blogging. Will try to post something in the next couple days :)

Wow Clue, Be still.....I remeber those days and long to return to them. I know that the Lord is going to bring me to the place where I can hear him say, "Bill, be still my son, and know that I am God" - thank you for seriously following after the Lord. It blesses me beyond words. Thank you for describing what you saw in such a way that I can actually see it in my minds eye. Incredible!

Just reading your words...I can visualize this in my mind. And I love it. Thank you!

Wow, you described that incredibly well! I could picture it in my head as if I were seeing it. Truly, truly beautiful. :-)

That is so awesome! I love thunderstorms when it's dark. They are just amazing to watch.

Another great place to watch a thunderstorm is from an airplane (well at least when you're above it).

I remember one year I was on a night flight from Miami to Mexico City and somewhere over the gulf there was a huge thunderstorm north of us, it was amazing to watch it from "the top side"

Simply breathtaking! I wish I could have seen it.

Dang girl...just from your description I can almost see it. Your writing is seriously becoming more thought provoking. Great enjoyment once again Clew....

I was there with you in spirit. :)

ditto what everyone else said. That was an awe inspiring description. Be still and know that I am God...gave me chills.

It occurs to me when you talk about your husband that you two have made a very good match.

One thing I've missed since moving to NM 3 years ago is thunderstorms, they rarely occur in this part of the state. I'm looking forward to seeing those bubble up over the plains again after the move.